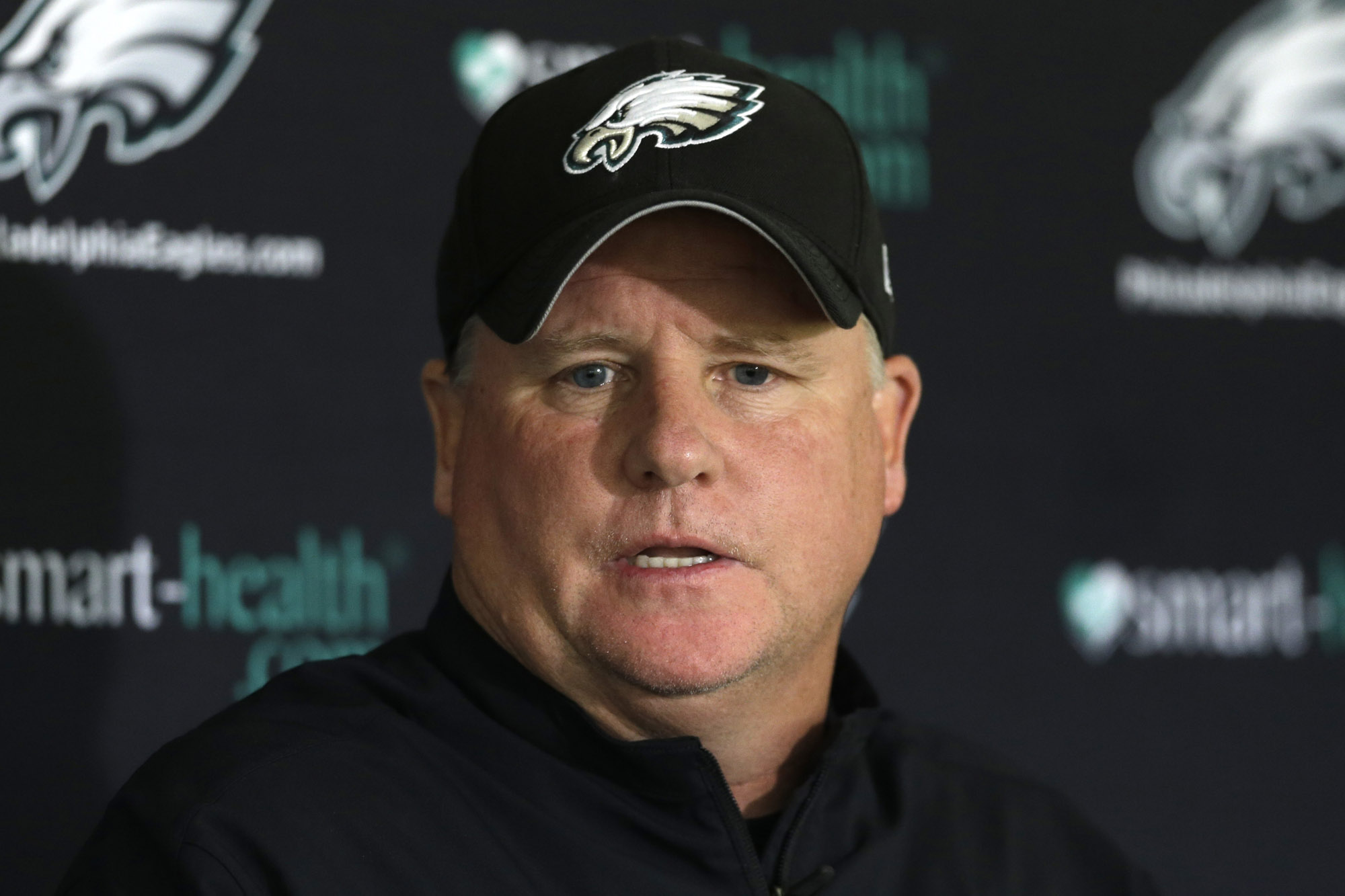 Bill O’Brien can’t pinpoint the exact moment, but it was sometime in the early spring of 1994, when New Hampshire’s football coaches visited their Brown equivalents on the Providence campus. It could have come, huffing and puffing, between possessions of pickup hoops at the Olney-Margolies Athletic Center. Maybe it was over greasy slices of pizza and pitchers of cheap beer. Or perhaps it was when the two teams’ grunt-level coaches took turns watching film and dissecting plays on a chalkboard. Whenever it was, Chip Kelly made a distinct impression on O’Brien way back then, when both men—O’Brien was the inside linebackers coach at Brown, Kelly oversaw the running backs at UNH—were so far away from the NFL lights that they couldn’t even dream of them yet.

“The first time you meet him, you know he’s smart,” says O’Brien, now entering his second year as the Texans’ coach. “He’s a quick thinker. He changes gears so fast: He can be talking about one thing and then change to something else in a beat. But he’s also a real good listener. And it doesn’t take long to realize he thinks differently. You’re like, Who is this guy?”

Five days after the conclusion of the 2014 season, coming off a second straight 10–6 campaign (this one without the reward of the playoffs), Kelly wrested personnel control away from general manager Howie Roseman. From there Kelly slashed and shaped his roster: Over a two-week stretch he released linebacker Trent Cole, cornerback Cary Williams, guard Todd Herremans and tight end James Casey, all of them expensive veteran stalwarts, and he refused to match the Chiefs’ free-agent offer for his leading receiver, Jeremy Maclin. Kelly further shocked the world by trading LeSean McCoy, the franchise’s all-time leading rusher, to the Bills for a linebacker, Kiko Alonso, who was coming off an ACL tear. Then he swapped quarterback Nick Foles (27 touchdowns against two interceptions in ’13) to the Rams for Sam Bradford, who saw his past two seasons end with ACL injuries. In free agency, Kelly doled out $121.1 million ($54.6 million guaranteed), beginning with $40 million (over five years; $21 million guaranteed) to sign 2014 NFL rushing champion DeMarco Murray away from the Cowboys. For the cherry on his overhaul sundae, he inked some guy named Tebow.

It was a staggeringly free-wheeling display for a guy with just two years of NFL experience and who has yet to win a postseason game. Even owner Jeffrey Lurie admits that there have been times when he’s wanted to make sure that Kelly knew what he was doing. “We had long talks about it,” he says. “These are usually decisions with weeks and weeks leading up to [them]. He’s bright. He’s hardworking. He’s obsessed with football. It doesn’t matter to him, the public perception of a trade. He’s all about making us better—and that’s what you want in a coach.”

Kelly preaches that he wants “taller and longer people because bigger people beat up little people.” That maxim applies primarily on defense, but it’s relevant at receiver as well, which partly explains why he released Pro Bowler DeSean Jackson (who’s barely 5’ 10″) last year. Now the shortest receiver on Philly’s roster is Josh Huff (5’ 11⁄4″), who played out wide last season but now will likely be relegated to the slot. Most of the Eagles’ wideouts are at least 6 feet tall, including both free agents they signed this off-season, Miles Austin (6’ 2″) and Seyi Ajirotutu (6’ 3″), as well as first-round pick Nelson Agholor, who USC listed at 6’ 1″.

Kelly’s daring rebuild and resolute belief in his own system brings to mind a few other coaches who turned the league on its ear with new approaches. Bill Walsh, Jimmy Johnson and, to a lesser extent, Bill Belichick all ruffled feathers by daring to innovate despite their unproven track records, but they were steadfast in precisely the types of players they wanted and quickly implemented their own systems.

During 2005 spring practice, when he was still the offensive coordinator at his alma mater, New Hampshire, Kelly visited Oregon OC Gary Crowton in Eugene, himself a former UNH assistant. Despite earning next to nothing, Kelly regularly visited other colleges—places like Wake Forest and Northwestern—on his own dime in search of more information; he even did a two-week internship in the CFL, where he picked up the influence of motion and using the entire width of the field. With Crowton he wanted to watch the Ducks install the spread offense they’d used at New Hampshire. Oregon’s coach at the time, Mike Bellotti, recalls that Kelly “probably said but 10 words” to him in Eugene.

But Kelly and Crowton continued to share film after that visit, and eventually Crowton showed Bellotti a play that Kelly had run with the Wildcats. Together the Oregon coaches decided to use the gimmick—“a fly sweep concept but from the shotgun, with a toss forward,” says Bellotti—for the first play of their 2006 season, against Stanford. “The receiver in motion dropped it,” Bellotti recalls. The play, however, was so new that officials initially ruled a fumble, recovered by the Cardinal. This was the first year in which a coach could challenge a ruling and here was Bellotti questioning the very first play of the season. The call was overruled, incomplete, the Ducks won the game 48–10 and Kelly had impacted Division I football while still coaching in Division I-AA. In ’07, Bellotti hired Kelly to be his offensive coordinator.

Four years later, in 2011, Kelly was heading to his hometown of Manchester, N.H., when he rang up his old hoops and beer buddy, O’Brien, who was then the Patriots’ offensive coordinator. “Can I stop in and b.s. with you?” he asked. Soon he was in a Patriots’ meeting room with O’Brien and offensive assistant George Godsey, talking football for an entire day. “It was cool,” says O’Brien. “Just three football minds trading ideas. He was averaging 50 points at Oregon [Kelly was the Ducks’ head coach by this point] so we wanted to figure out what he was doing. He’s not going to give you exactly what they’re doing, but he gives you the concept.”

Two more visits to Foxborough followed, and eventually Belichick joined the discussions. That’s when Kelly explained that he was running his Oregon offense with just a series of one-word play calls. The Patriots were incredulous, but Kelly put them at ease. Players can memorize elaborate song lyrics and movie lines, he explained; why should a football play be any different?

Interesting and influential. New England started to install Kelly’s system in 2011, with mixed results. By ’12, the Patriots had six one-word calls at their disposal. They used those sparingly until Week 5 of that year, when they unleashed them against Denver. The Broncos were in complete disarray as the Patriots raced out to a 31–7 lead. New England ran 89 offensive plays (then the second most in team history) and made a franchise-record 35 first downs. Chip Kelly, it seemed, had arrived in the NFL before he even got there. A little more than three months later, Lurie hired him as the Eagles’ coach.

At Oregon, Kelly took things to another level. His practices became shorter, but they were packed with plays and no one was allowed to stand around. There’s no time for coaching on the field, he felt; that’s for the film room. Players need reps.