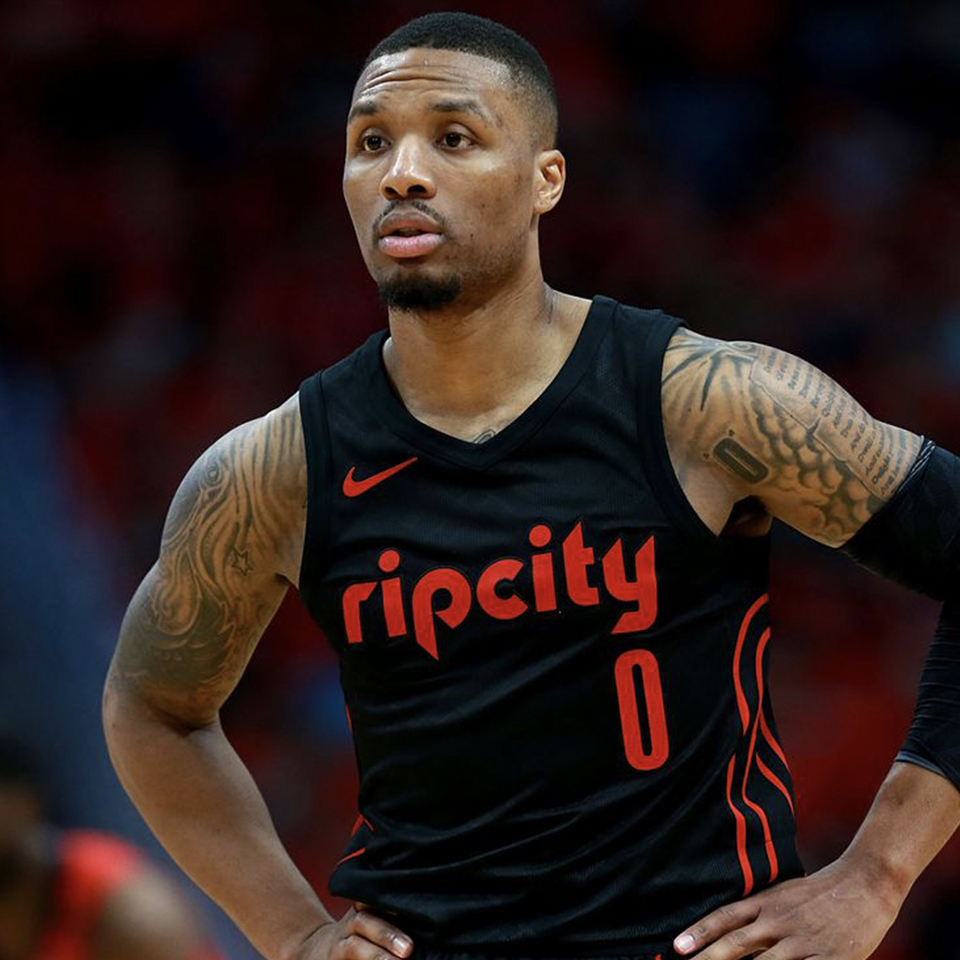 Everybody has a Damian Lillard story.

Last summer when an end-of-the-bench player named Tim Quarterman was traded to the Houston Rockets for cash considerations, the Blazers sent out a tweet welcoming a bag of money to Rip City. It was hilarious and fun, but one person wasn’t amused.

Within minutes, Lillard sent a text to Chris McGowan, the team’s president and CEO, telling him he didn’t like the tweet. When McGowan asked why, Dame said that while he understood the intent, the issue was that Quarterman’s life had just been uprooted.

“He came at it from a real personal level,” McGowan says. “That’s the level of detail that you get from him. It was protection. That’s the epitome of him.”

One night after a particularly brutal loss, Dame texted Evan Turner at 1:30 in the morning and told him he was sorry for blowing the game. Never mind that he had 30-something points. There was a play or two that he wanted back.

Jonquil Vann-Tessmer, a psychologist at Roosevelt High School in North Portland, was looking through her photos when she saw one of her students talking with Lillard like they were old friends. Vann-Tessmer told her student she didn’t know he and Dame were on that level.

And of course, there’s the story of how Lillard helped turn the Blazers into one of the best teams in the West. Back in January when the Blazers were scuffling through a difficult part of their season, ESPN’s Chris Haynes reported Lillard had a meeting with owner Paul Allen to discuss the future of the team, and gain Allen’s assurance that the organization is committed to building a contender.

A few weeks later, before the trade deadline in early February after a close loss in Boston, I asked Lillard if he felt like this team could compete with the other contenders in the West. “Yeah,” he said without hesitation, “We can.”

The Blazers lost the next night in Detroit, but went on to win 14 of their next 15 games.

THE TAO OF DAME

After getting swept out of the first round of the playoffs last spring, Lillard had a revelation. People could judge him however they wished. It was out of his control.

“It’s funny, because coming into this season, I kind of just relaxed,” Lillard tells me following a mid-March practice. “I was like man, I’m not going to kill myself over people not recognizing what I’m doing. I don’t need validation. I just let it go.”

What Lillard can control is the environment. His teammates notice he plays through injuries and that he holds himself accountable. They respect that he says what needs to be said in good times and bad, whether it’s on the court, in the huddle, or at the practice facility. The key to his leadership style is it’s grounded in the most human of terms.

“It’s not a job to care about the people around me,” Lillard says. “I won’t feel good about my success if everyone isn’t feeling happy.”

Dame’s numbers this season look similar to the numbers he’s posted throughout his career. He’s averaging almost 27 points and better than six assists per game. His shooting has continued to improve, as has his defense. There’s something else happening this season, however.

He manages the game better,” his coach Terry Stotts says. “He thinks the game better. His challenge is that as his team continues to perform at a high level, his team’s success is going to be a reflection on him.”

To get the best out his team, Dame approaches each of his teammates differently. He has developed a partnership with C.J. McCollum that’s built on mutual respect. He encourages Meyers Leonard, who had fallen out of the rotation, by recognizing the big man’s work in practice. Then there’s Jusuf Nurkic, whom Olshey cheerfully calls, “The highest variance player in the league.”

Nurkic can be a beast when engaged, and Dame is usually the one doing the engaging. He talks to him on the floor and sits next to him on the bench. He encourages often, but won’t let Nurkic make excuses. They watch film on the plane after games and Dame usually has a few plays he wants to go over, which he gets to when Nurk is ready.

In early March, Nurkic had his best game of the season, a 27-point, 16-rebound performance against the Miami Heat.

That night, the Blazers blew a double-digit lead in the fourth quarter while Lillard was taking his usual rest. He came back in with about six minutes to go in a three-point game and promptly buried a three-point shot to push the lead to six. This was a momentary manifestation of Dame Time, wherein Lillard bends games to his rhythmic flow.

“When shit starts to get tight, you know he’s ready for it,” says veteran forward Ed Davis. “There’s a lot of guys who say they got it, but they ain’t got it. Trust me. I’ve been long around to know that there’s only a select few that can do it on a nightly basis.”

It’s because of nights like that — with some irony, given his selfless focus — that recognition has finally come Lillard’s way. Lillard was named to the NBA All-Star team by the coaches, he’s a favorite for an All-NBA nod, and he’s even begun showing up on Most Valuable Player lists.

Dame hasn’t entirely stopped fighting for validation, even if that pursuit isn’t his sole drive. At the all-star break he declared he was the as good as any point guard in the league and he has not backed off that stance.

What makes Lillard unique is he’s not only able to take over games, he’s also able to see the larger picture. In his post-game interview following the comeback against the Heat, Dame deflected all praise to Nurkic. He also slipped in a shout out to Al Farouq-Aminu for knocking down a contested three after going 0-for-9 to start the game.

Dame mentioned the shot again two days later and expressed confidence in Aminu’s ability to snap out of a shooting slump. Sure enough, Aminu was 3-for-6 from 3-point range in a win over Cleveland the next night and then proceeded to go on a tear.

“People are trying to figure out how we’ve done it,” Olshey says. “A lot of it is the team bonding and jelling. But it really has been Dame knowing what we need out of each guy and getting into their psyche and empowering them to be a little better.”

“He’s just real,” McGowan says. “Authentic. I’m amazed at the way he treats people. Everything begins and ends with the way he carries himself.”

McGowan came to the Blazers in the spring of 2012, a few months after Olshey was named general manager and hired Stotts as coach. Olshey’s first draft pick was Lillard. Their task was to return the Blazers to their rightful place within Portland.

In an area that prides itself on nonconformity, the Blazers are the common thread that winds through generations of Portlanders. It’s a place where role players like Larry Steele and Bobby Gross have their jerseys retired alongside Bill Walton and Drexler, and a dock off the Willamette River is named after the late Kevin Duckworth.

There’s depth to their devotion, which is why the Jail Blazers era remains a flashpoint. Not so much for failed expectations on the court, but as a breach of trust between the franchise and the city. McGowan still hears about it all the time. “Rightfully so,” he says. “Because we let the city down.”

“It’s like, ‘What are you doing here, and what do you want with Portland?’” Lillard says. “It’s a thing out here to keep Portland weird. This is our place and this is how it is. That’s the perfect thing. Keep Portland weird.”

For the first three years of his career, Lillard was part of a veteran team. He marveled at how Wes Matthews always had an immediate grasp of game situations and how LaMarcus Aldridge would bully his way into the block just to set up his patented turnaround baseline jumper. For guidance, he leaned on Earl Watson, who pushed him to be more assertive.

When Aldridge and Matthews left in 2015 following a 51-win season, the Blazers began to rebuild around Dame. While they got younger, they still intended to compete. Lillard was about to enter his prime, and beyond that, Portland’s not a city that would embrace a tank. “That would last about five minutes,” Olshey says. “We’d be on the first Alaska Airlines flight out of here.”

The rebuilding effort began when Dame signed an extension for five years with no options. Lillard organized offseason workouts in San Diego and regularly invites his teammates over for dinner in Lake Oswego, where he lives year round. Even with minimal expectations, Dame continued to lead the Blazers back to the playoffs.

“At some point the gravitas that he has, the leadership ability, he’s going to be able to add more in the locker room and the organization so that we’re going to be able to accelerate this rebuild,” Olshey says. “Not because of who he can attract to the market, but how he can elevate the guys around him.”

In order to properly lead the franchise, Lillard believed he needed to go beyond the confines of the locker room and make a connection with the city. He began an anti-bullying campaign during his rookie season and has been such a presence at his summer camps that kids all over Portland consider themselves on a first-name basis with Dame.

“It’s such a low-maintenance city,” Lillard says. “Nobody here cares about flashy stuff and that’s my personality. I’m laid back, low maintenance. They know I’m not looking for attention. I want to help.”

This is the lesson of Lillard’s story: That to make an impact, simply begin by taking care of the people around you. And by striving to make things a little bit better than they were, we can create other ways to enjoy even something as cynically results-driven as the NBA. After all, if there’s not inherent joy in those pursuits, then what, exactly, are we doing?

Everybody in Portland has a Damian Lillard story to tell, even Dame, and he already knows how he wants it to end.