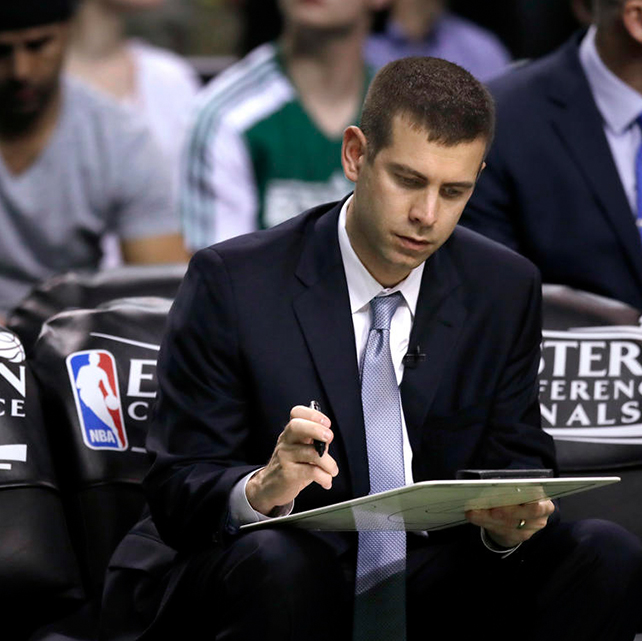 Brett Brown, the Philadelphia 76ers head coach, is fond of saying, “The pass is king.” As the Boston Celtics extended to a 3-0 lead against Philadelphia in the Eastern Conference semifinals, making seemingly every big play, some Celtics staffers began whispering their own version: “Toughness is king.”

The last slide of the film edit that Brad Stevens, Boston’s coach, showed his team before Game 3 in Philadelphia contained a definition of toughness Stevens found recently in a book (he can’t recall which one; he reads a lot): “Toughness is being able to physically and emotionally perform your task through any condition.”

Stevens had been annoyed by Boston’s approach to Game 3 of its first-round series against the Milwaukee Bucks, and he wanted his team to play each possession with urgency. That, to Stevens, is toughness.

“If things are going really well in a home game, do you get caught up in that, or do you keep playing the right way?” Stevens asked in a chat with ESPN.com the day after Boston’s Game 3 win in Philadelphia. “If things are going like they were in the second quarter last night [when the Sixers went on a run], do you say, ‘I have a job to do and I’m going to do it, and I don’t care that everyone is going nuts over this [Joel] Embiid dunk?’ That is toughness. It sounds cliché, but the hardest thing to do is stay in the moment and do your job.”

So, yes, Boston is talented. But this wasn’t supposed to happen. A few days before the season, Danny Ainge, the team’s general manager, gathered Horford, Kyrie Irving and Gordon Hayward for a private meeting, Horford recalled. Ainge told them it would be their jobs to mentor the young guys. That was what was supposed to happen.

A week later, Hayward shattered his leg in the season opener at the Cleveland Cavaliers. Boston rallied but lost. It lost again the next night at home to the Milwaukee Bucks. After a win at Philly completed a three-games-in-four-nights whirlwind, Stevens called a meeting to take stock. “We needed to be together,” he said.

He told the players Hayward would be OK. But Stevens wanted to shift their focus to the remaining 79 games. He warned them: Don’t use your youth as excuse, Stevens and several players recalled. “Expedite your learning curve,” Stevens remembered saying. “If there’s film to watch, or something you need to work on with a coach, go do it.”

Almost every playoff team has one or two guys who make you wonder: Are they really ready for this? Are they going to shrink under postseason pressure? How will they respond when the other team amps up the physicality?

Boston has zero such players. This is a fierce team. No one is afraid to shoot, or venture outside his proven skill set — something almost everyone has had to do since Irving’s knee surgery. They give maximum effort every second. It is a focused effort; they rarely veer out of scheme. Hit them, and they hit back — harder. Nurturing such a strong culture while returning only four players from last season’s team is an enormous challenge.

It starts with Ainge, who has a soft spot for manic competitors. All things (almost) equal, Ainge is going to take the guy who needs to get loose balls. “My staff laughs at me,” Ainge told ESPN.com, “because I always gravitate to those kinds of players.” He is still gushing about Aaron Craft.

Gather enough tough players and it can have an exponential effect on a team’s collective toughness. They inspire each other to more intense fury. They hold everyone accountable; even brief moments of lethargy and weakness are unacceptable. Wyc Grousbeck, the team’s owner, compares them to a crew team rowing together: They feel when one guy is giving only 90 percent, and either push him harder or eventually replace him. “This is my favorite Celtics team ever, in terms of energy, camaraderie and underdog spirit,” Grousbeck said.

“This is a special team,” Ainge said. “This is as much fun as I’ve ever had.”

Ainge picks the players, but Stevens is the arbiter of playing time. The (deserved) fawning over his stoic demeanor and play-calling genius has obscured another fundamental truth: Stevens is something of an old-school hard-ass. “If guys aren’t doing their jobs,” Horford said, “they just won’t play.”

In Boston’s seventh game of the season, Shane Larkin failed to pursue a loose ball along the left sideline:

Stevens removed Larkin at the next stoppage. He didn’t play again until garbage time. “I learned right away,” Larkin said. “If you don’t get a 50-50 ball, you are coming out.”

Stevens didn’t upbraid Larkin. He approached him calmly and told Larkin why he had been taken out. In evaluating players, both during games and in film sessions, Stevens is careful with language, according to coaches, players and team higher-ups. He focuses on actions: We didn’t get this rebound. You should have made this rotation earlier. The criticism is never about the player’s character. No one is labeled lazy or stupid or selfish. Stevens simply describes what did or did not happen, and what should happen next time.

That has gone a long way in securing buy-in, players say. They feel Stevens is with them, even as he holds them — and himself — to almost impossible standards. That is a hard balance to strike. It is not a show, either.

After losses, Stevens often approaches Ainge and apologizes for “blowing it,” Ainge said. “He is always saying that,” Ainge said. “Honestly, it’s kind of like listening to players blame themselves. He’s like a player. He never whines about the players, just himself.”

Even private kvetching about players among coaches and front-office staff can undo a team. Rumors start. Factions develop. That hasn’t happened in Boston.

There are no bells and whistles to Boston’s culture. They don’t regularly host famous guest speakers or take field trips. They’ll organize occasional team dinners, but there are no ritualistic, hours-long nights of wine, food and storytelling. Stevens, Ainge and the veteran players have created an environment of serious, hard, consistent work.

Stevens essentially has banned rookie hazing. He wants rookies to take as much ownership of the team as the stars — and to voice their opinions. (This is the same reason Stevens declines to name captains.) Pranks waste time. He was not thrilled last season when culprits unknown filled Brown’s car with popcorn. “Oh, Brad was not happy,” Brown said. “He had my back.”

“I’m kinda glad,” Tatum said of the hazing restrictions. “I don’t want popcorn in my car. I would flip.”

Stevens is still careful to make sure basketball doesn’t become drudgery. In a practice just last week, Stevens surprised the players by inserting himself into a drill centered around defending post-ups. He guarded Baynes, a literal giant, as Baynes ducked in for post-up after post-up. Baynes tossed Stevens all over the floor. Everyone laughed. They also noticed Stevens battling as hard as he could.

He lets two assistants, Micah Shrewsberry and Matt Reynolds, splice a recurring bit called “Who He Look Like” (a spoof on the Charles Barkley annual “Who He Play For?” test) into film sessions. Examinations of pick-and-roll schemes will suddenly fade into videos of celebrities who allegedly look like members of the team: Drake from “Degrassi” for Tatum; Larkin and Abdel Nader as members of the old R&B group DeBarge; Braun Strowman, the WWE superstar, for Baynes; Marshawn Lynch for Smart; a mustachioed 1980s Ainge as Ron Burgundy.

But the work always governs. Horford has been a touchstone. When Boston’s sports science team went to do some early-season testing on Larkin, he thought initially he might be able to use his veteran status to get out of it, he said. Then he saw Horford and Hayward volunteering.

You hear the same thing from the front office, the coaches, the business and medical sides: Every player is game for whatever they ask, and more. They motivate each other without craving credit for anything. “We embrace each other,” Brown said. “Last year, there were a lot of times where people were trying to figure things out on their own. That is the biggest difference this season.”

Elite toughness and mental stamina alone won’t get you far in the world’s best league. Add talent and you get a team that punches above its weight. Boston just makes fewer mistakes than almost any rival.

They are ultra-switchable on defense, always on a string:

Rozier guards four different Sixers in about nine seconds there, without ever pausing in thought. Brown guards two and ends the possession sticking with Dario Saric. Horford slides toward the foul line to help cut off Saric, but not so far — or for so long — as to expose a passing lane from Saric to Amir Johnson.

These plays are not highlights. Some of them don’t even lead to misses. A lot of the Celtics’ greatness on defense — they led the league in points allowed per possession — lies in the absence of schematic mistakes. It seems mundane, but for all five guys to do it right on 90 out of 100 possessions every game takes extraordinary discipline and hoops IQ.

They have shown a similar composure in hothouse moments: Game 7 against Milwaukee; and three close wins against Philly, culminating in an almost perfect final 90 seconds to pull out the Game 5 clincher.

Some of that clutch play comes from having mature, confident players. Some of it is Horford settling them. And some of it emanates from Stevens. His calm demeanor makes for good satire, but the more you talk to players, coaches and executives across the league, the more you begin to believe such things matter. Stevens’ placidity is intentional.

Frantic, screaming, gesticulating coaches can raise panic in players who might be prone to it. Some players tune out everything. Some follow the lead of authority figures. They look at Stevens and see assurance. They see, “Next play.” “Some players have a tendency to get frazzled or emotional,” Ainge said. “Brad helps with that.”