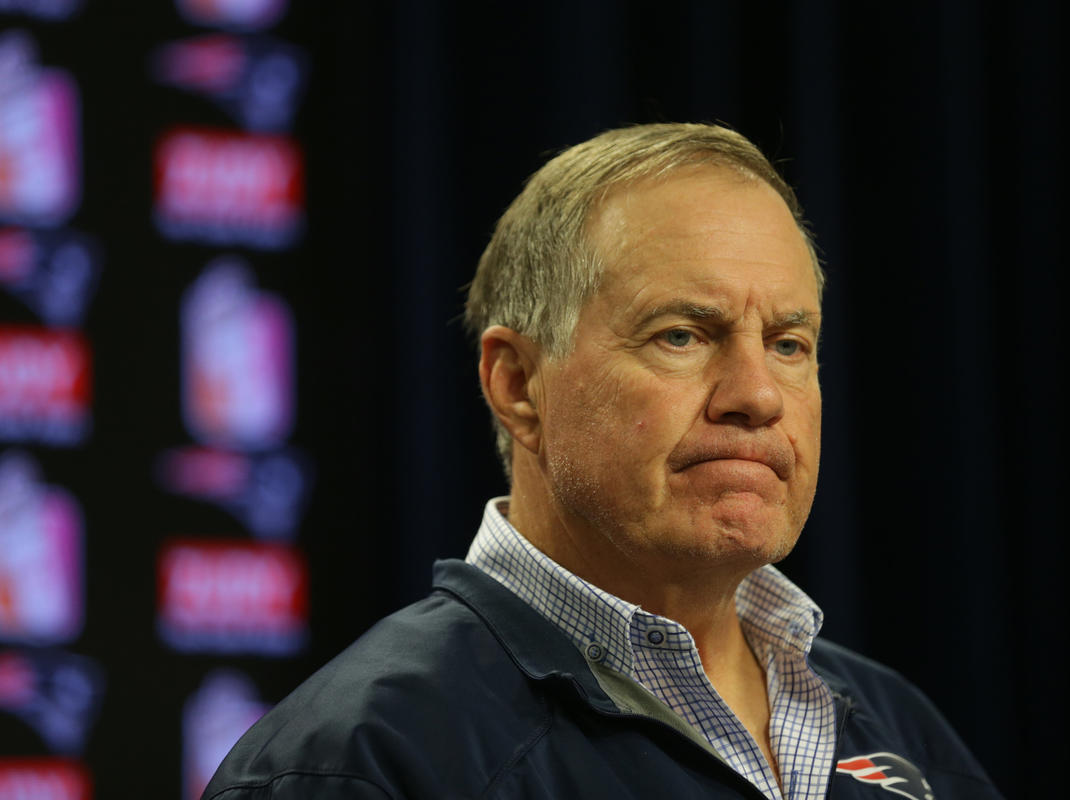 Nearly a decade ago, after Charlie Weis left the New England Patriots for Notre Dame, his old corner office in the New England Patriots’ facility sat empty for a few months. It quickly turned into a de facto personalized workout room and unofficial draft headquarters for head coach Bill Belichick. He ran on the treadmill and rode the exercise bike in there, with film equipment rigged to watch college players while working out.

One coaching candidate on a job interview recalled being quizzed by a sweaty Belichick mid-workout. Part of the interview included an impromptu evaluation of an obscure guard prospect from a low-level school. That image of Belichick, slogging along, soaked in sweat and finding paradise by the film projector’s light is an appropriate image when attempting to quantify how the Patriots evaluate and draft college prospects.

Interviews with a half-dozen college coaches whom Belichick either values in the draft process or consistently mines talent from their program reveal a portrait of a coach and organization relentlessly trying to quantify the unquantifiable – toughness, love of the game and football IQ.

In interview after interview, the conversation turned back to Belichick, whose evaluation ability is much easier to quantify – he grinds out the draft harder than any coach in the NFL.

“I’ve never experienced that with any other team, not to the extent that he’s involved,” Ohio State coach Urban Meyer said in a phone interview this week. “With other teams, I’ve had first-round picks where I’ve never talked to the head coach. I’m not sure who they’re talking to.

“It’s a great lesson for all of us. We think we have all the answers, but to have the answers you have to work really hard at it.”

What separates the Patriots in the draft and evaluation process?

Meyer said New England’s evaluation is so hands on that he recalls defensive coordinator Matt Patricia asking for film of specific practices that helped show a prospect’s toughness. Former Arkansas and Wisconsin coach Bret Bielema says Belichick will call annually about prospects and be unable to resist peeking ahead to prospects who’ll be eligible the following year. (He did that a year before Melvin Gordon left Wisconsin.)

Iowa coach Kirk Ferentz recalled a 20-minute conversation with Belichick last spring about former Hawkeye offensive lineman Cole Croston, an undrafted free agent who will be on New England’s 53-man roster for the Super Bowl. Ferentz chuckles as he recalls a one-way conversation with “him telling me, not me telling him” about Croston.

“I remember hanging up the phone and thinking, ‘How many coaches in the NFL even know who Cole Croston is?’”

Ferentz chuckles at the memory.

“Forget about evaluating him, knowing who he is. I’m not sure if anyone does as much work and research on players as Bill. He has an ability to see a little further than the obvious.”

The ability to see and trust has evolved over the years with Belichick. Few would know better than Ferentz, who worked for Belichick in Cleveland from 1993-95. Ferentz’s son, James, is one of three Iowa players on the Patriots’ roster and another son, Brian, worked for three years as a Patriots staff member.

Ferentz recalls the metrics Belichick used in Cleveland for drafting players modeled after the New York Giants teams of that era. They were swayed heavily by the size and speed of prospects, trying to replicate the punishing defenses and physical offenses under Bill Parcells during his Giants heyday.

These days, Ferentz points to the undersized, undrafted and overlooked players who have dotted the Patriots’ roster on eight Super Bowl teams under Belichick. He marvels at the philosophical shift, which could also be interpreted as Belichick evolving as a personnel man, more refined and defined in his vision of what players will work in his system.

Ferentz points to undersized players like former safety Rodney Harrison, unconventional players like quarterback-turned-receiver Julian Edelman and a roster with 18 undrafted players as proof of “a transformation” in philosophy.

“If you look at New England,” Ferentz said, “the roster doesn’t fit some of the parameters we had in Cleveland.”

Belichick is the only coach in the NFL with total control of his 53-man roster, which means he essentially serves as the general manager. That necessitates him being more hands on. Coaches he relies on vary, but they include Ferentz, Meyer, Bielema, Alabama’s Nick Saban, Notre Dame’s Brian Kelly, Navy’s Ken Niumatalolo and former Oklahoma coach Bob Stoops.

Before Bill O’Brien joined the Patriots’ staff, he worked at Duke, Maryland and Georgia Tech, and Belichick picked his brain on ACC players. Former Arizona coach Mike Stoops strongly recommended Rob Gronkowski, a risky second-round pick in 2010 because he’d missed the entire year prior to declaring.

Each spring, Belichick traverses the country to personally work out prospects, grinds the phones and sets a clear and concise organizational vision for what he’s seeking in players. In 2016, days after the Patriots got eliminated in the AFC championship game by the Denver Broncos, Belichick was spotted at the Senior Bowl sitting by himself in a baby blue Tufts lacrosse sweatshirt. Along the scouting trail, a vision has formed of what he’s seeking.

“They’re looking for intangibles, they’re not looking at a spreadsheet,” Bielema said. Four of Bielema’s former players are on the Patriots’ roster, including the offensive and defensive stars of last year’s Super Bowl, James White and defensive end Trey Flowers.

Both are fourth-round picks – White played for Bielema at Wisconsin and Flowers at Arkansas – and are undersized for their positions. So is rookie pass-rush specialist Deatrich Wise, whom the Patriots picked after a poor statistical senior season at Arkansas when he broke his hand. (He dipped to 5.5 sacks from 10.5 as a junior). Belichick saw through that, and Wise looks like another fourth-round steal after compiling seven sacks this season, including two in the playoffs.

The Patriots have far from a perfect track record in the NFL draft. Most glaringly, they whiffed massively on the depths of character concerns regarding former tight end Aaron Hernandez. They’ve squandered first-round picks on busts like Dominique Easley and Laurence Maroney. They’ve got disappointing results from programs run by Belichick cronies, most recently former Alabama defensive back Cyrus Jones, who came from Saban’s program. There’s 18 undrafted players on their roster in part because of failings with the picks they have.

While imperfect, the vision and directives appear. There’s a famous story in New England about Belichick reaming out a strength staff member because he couldn’t come up with a drill to replicate and quantify Wes Welker “short area quickness,” or his ability to burst in spurts to get open. It’s obvious watching film that what Welker does stands out. And Belichick’s burning desire to find it left the staff sympathetic to the strength coaches who couldn’t figure out a metric to quantify it.

There’s no 40-yard dash or 225-pound bench to measure things the Patriots have truly come to value – toughness, love of football, willingness to play hurt and an ability to comprehend and execute schemes. Does someone love ball? Is he a team guy? Is he self-motivated? One key question the Patriots frequently ask prospects: “Tell me about a time in your life when you had to overcome some adversity?”

While none of those inquries is unique in scouting, the Patriots have found a way to use the information to find late-round and undrafted prospects that fit on the field and in the locker room.

“I think Coach Belichick values what we all say we value,” said Texas coach Tom Herman. “And he doesn’t deviate.”

College coaches say that Patriots scouts tend to not chitchat with other scouts during practices, as they are off on their own. It’s not uncommon that they’ll mine the building for information from staff members outside the coaches and strength staff. They’ll pick the brains of managers and anyone who interacts with them in the building.

It’s likely not a coincidence that the programs who end up with multiple players on the Patriots’ roster tend to be pro-style programs known for a hard-nosed ethos. There’s Stanford (3), Iowa (3), Michigan (3), Arkansas (3), Rutgers (3), Pittsburgh (3), Alabama (2), Georgia (2) and Vanderbilt (2). It’s not a coincidence many of those are coached, or were coached, by Belichick confidants.

“I think there’s something to that, for sure,” Ferentz said. “He knows when he’s talking to someone at the end of the line [he trusts], we all have a level of comfort with certain people.”

There are anomalies, of course, which show the flexibility the Patriots have in their scouting. The Patriots have starting offensive linemen from pure pro-style programs Stanford (Cam Fleming) and Georgia (David Andrews), and two other starting linemen from a hyper-spread program (LaAdrian Waddle from Texas Tech) and a triple-option program (Shaq Mason from Georgia Tech).

Shaw watches the cut-ups of the entire Patriots offense each season to learn the nuances and tweaks of how they run their offense, especially what they do with tight end personnel. “He’s one of the most consistent human beings on the planet,” Shaw said of Belichick.

How high of a compliment is interest from Belichick? The agent for undrafted free-agent fullback James Develin told Sports Illustrated this week that if his client signed with New England and got cut, there’d be a chance another team would sign him just because Belichick showed interest.

All the conversations with college head coaches this week wound back to Belichick himself, a testament to his immersion in a process that’s changed and evolved significantly since he worked in Cleveland more than two decades ago. Belichick pores over the information his scouts provide, valuing the intangible evaluations more than anything. “It’s hard to quantify,” linebackers coach Brian Flores said. “There’s a thousand variables. A lot of times people get it wrong. How do we do it? I don’t know.”

Mostly, it comes back to an unrelenting coach sweating on the treadmill and watching film to see what his intuition tells him. As he works off his actual gut, he trusts his intuitive one. As the Super Bowl appearances and late-round steals show, it’s a sound game plan.