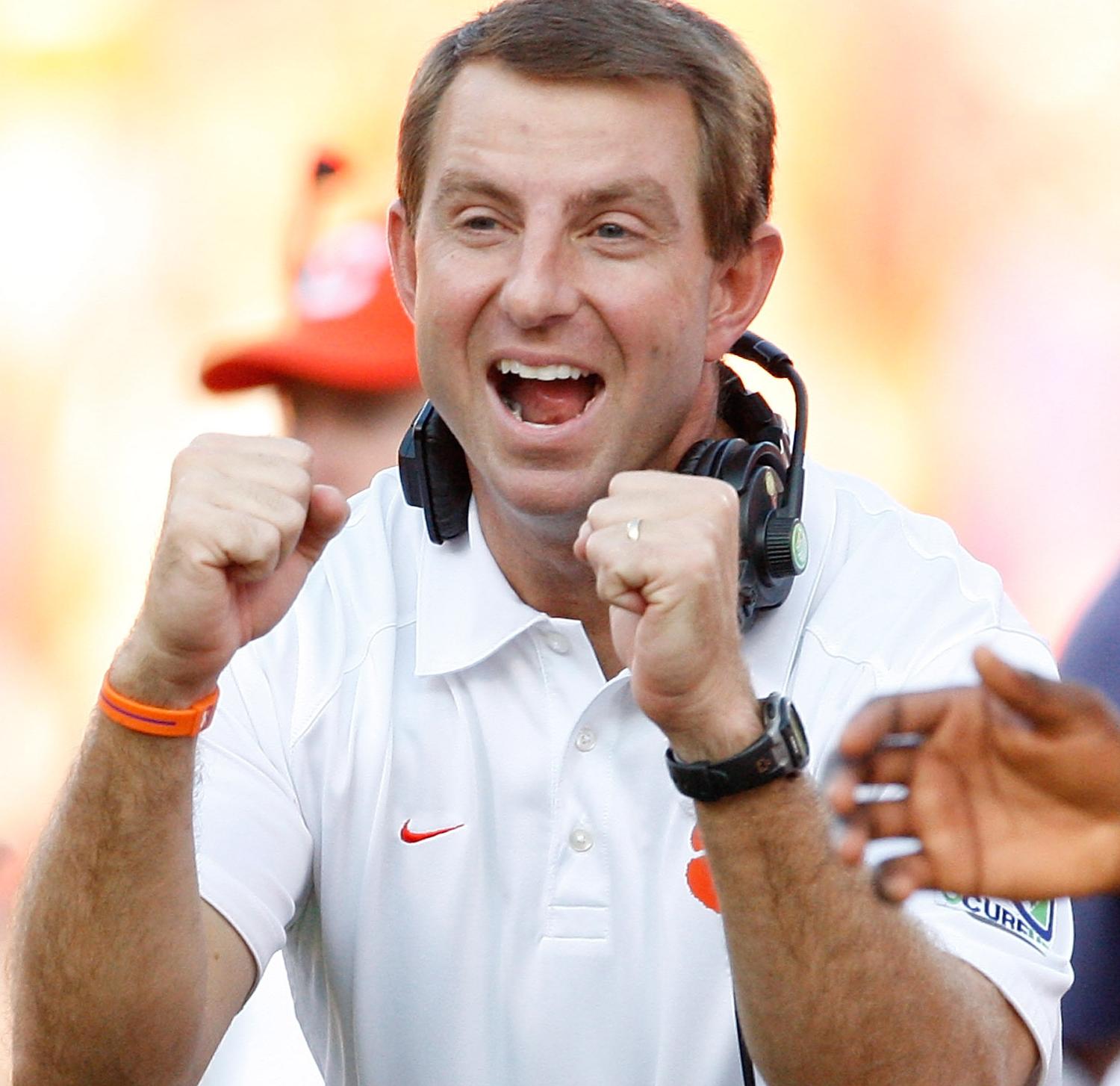 Dabo Swinney was wiped. Four days as Clemson’s interim coach had drained the guy whose tank is always full.

But when the board of trustees invites you to their breakfast, and you’re a 38-year-old with no head-coaching experience who’s presented the chance to lead a major program, you go. So Swinney arrived for the 7 a.m. breakfast on Oct. 17, 2008.

He smiled as board members he didn’t know pledged their support. One tried to dispel a perception that the board only valued academics and said that Clemson could also excel athletically. Then, the trustee listed several schools that seemingly had achieved that balance. Florida was one, Georgia another.

Swinney immediately began fighting with himself, whether or not to respond.

“Literally in my mind, it was like, ‘Do it. Nope, don’t do it. Do it,’ ” he said recently in his office. “It was one of those battles where I was like, ‘Well, this might be a short tenure.’

A few moments passed. Then, the interim coach made a statement that deserves a permanent place in Clemson lore.

“I want to become the model.”

Amazingly, no one choked on their bacon or spit out their grits.

“It was a wonderful moment,” said Smythe McKissick, a trustee at the time and now chair of Clemson’s board. “It was taken very, very well. It was so abundantly clear that he was a genuine person and a real leader.

“That was the beginning of what’s been an incredible run.”

Seven-and-a-half years later, Swinney is achieving his vision. Clemson is 56-12 in the past five seasons with three top-10 finishes, two Orange Bowl championships and last year’s run to an ACC title and the College Football Playoff national title game. Swinney has signed six straight top-15 recruiting classes. The program has ranked in the top 10 percent of Academic Progress Rate scores for FBS programs in each of the past five seasons.

This spring, coaches from Arizona to Yale paraded through Clemson’s offices, learning about what has worked there.

Yet if Clemson has indeed become a model program, it’s an unusually soulful one.

We’ve been conditioned to equate elite football success with being all business, publicly padlocked, singularly driven, colorless and generally un-fun. Fair or unfair, the two most successful football organizations, the New England Patriots and Alabama Crimson Tide, feed this perception.

When Clemson stood cleat to cleat with Alabama before losing the CFP title game in January, it marked the end to the Tigers’ remarkable 2015 story — an open book, really, with a protagonist coach so animated that he can come off cartoonish before you realize he’s totally for real.

Think of the main images from Clemson’s run: the elaborate locker room dances after wins, with Swinney in the middle; a charged-up Swinney, rain-soaked and surrounded by fans after the Notre Dame game, putting BYOG (Bring Your Own Guts) into college football’s glossary; Swinney delivering on his pizza promise to buy pies for tens of thousands of fans if Clemson made the playoff. Even his postgame blowup about Clemsoning came off more genuine than typical media exasperation.

Most coaches place a list of values or goals in their room. Swinney’s ends with:Have Fun!

“I want these guys to have a great experience, and the fun’s in the winning,” Swinney said. “Let’s not make winning a relief. Let’s not be miserable when we win. There’s definitely people in places that even when they win, they’re not happy. That’s sad.

“That’s never what we want to be here.”

A $55 million football operations center, set to open in 2017 near the stadium, will create more brag space. But Swinney isn’t big on it.

“This,” he said, holding up two blown-up graphics from The Wall Street Journal placed next to his desk, “is the best accomplishment we’ve had since I’ve been the head coach. It’s a simple piece of cardboard, but it’s the best trophy we’ve got.”

The Journal’s “Grid of Shame” plots college football programs according to on-field success and degree of shame, which considers academic performance, NCAA violations/compliance record, player arrests and other factors. The most successful and upstanding programs are placed in the upper right quadrant. Clemson is there, rubbing elbows with Stanford.

Swinney enjoys joshing his close friend David Shaw, the Stanford coach, about how Clemson is “the Stanford of the East Coast and they’re the Clemson of the West Coast.”

“I’ve heard him say that a few times,” Shaw said, laughing. “It’s great that we’re both in that upper right corner.”

Shaw and Swinney are an odd match, different in background and demeanor, but they bonded several years ago during a Nike coaches’ trip. As Swinney tried to make Clemson a true original, he found synergy with Shaw, who says Stanford “can’t be like everybody else, so even to try would be folly.”

It’s more of a choice at Clemson than at Stanford, but both coaches believe in promoting their uniqueness.

“Operating in our own world is what we should do,” Shaw said. “We’ve talked about that a bunch, partially because of who Dabo is. He wants good people, smart people, and he’s not going to sacrifice that ideal.

“There’s so much we have in common as far as how we try to do our jobs.”

Swinney knows every GIF of his dancing and every BYOG T-shirt sold along College Avenue feeds a certain image. But it’s not the whole Dabo.

“There’s nobody tougher on the players than me,” he said. “Nobody.”

Every successful coach needs to be tough at times. But it doesn’t have to be the starting point.

Tigers senior linebacker Ben Boulware calls Death Valley “a stress-free environment.” Players know the expectations and the boundaries. They know they’ll be pushed. But they don’t tiptoe around the football offices or live in fear of their coach. Neither do Swinney’s assistants.

“Sometimes there’s this alpha male concept, Social Darwinism, where it’s survival of the fittest, a Neanderthal-type attitude where you’ve got to break them down to build them up,” defensive coordinator Brent Venables said. “That’s so not Dabo Swinney. He makes himself so vulnerable.

“So many head coaches have their guard up, even around the players, but he’s very vulnerable to all of us.”

Swinney broke down in front of the team in August after his father passed away. The coach spoke about a relationship that had tough moments — Ervil Swinney’s alcoholism ripped apart the family when Dabo was in high school — and beautiful moments, especially near the end.

It’s a scene Boulware won’t forget. “I respected him more,” he said.

With that as the baseline, Swinney can push, punish and challenge. Practices are tough, but Swinney also gives players most Saturdays off in the spring. He often reminds his assistants: Be sure these guys are having fun.

Tigers wide receiver Mike Williams has friends at several SEC schools but says, “I feel like we’re having more fun than them. It’s businesslike or they don’t like it.”

Clemson has had its share of off-field problems, but Swinney responds swiftly. He sent three players home from the Orange Bowl in December, including dynamic freshman receiver Deon Cain, who remained out of practice this spring but hasn’t been cast off by Swinney or the program.

If it makes him a players’ coach, so what? Look at the results.

“Coach Swinney has done a good job of changing that perspective, that stereotype of a businesslike environment,” Boulware said. “There definitely are coaches following his lead.”

Recruits and other visitors walking through Clemson’s massive players’ lounge pass an orange sign on an easel: Clemson is one of only 2 teams to have 5 consecutive 10+ win seasons (the other being Alabama).

There’s great respect for Alabama at Clemson, starting with Swinney, a former walk-on receiver for the Tide who eventually became a captain, won a national title in 1992 and started his career there under his coach, Gene Stallings. Even before facing the Tide for the national title, Clemson often discussed Alabama and its remarkable consistency, co-offensive coordinator Tony Elliott said.

After winning it all for the fourth time in seven seasons, Alabama is viewed as the model program in college football. What Clemson hopes to be is an alternative.

“We understand our program is run differently because of the vision and the personality of the two head coaches,” Elliott said, “so we are setting a model for what works for us. What Alabama does works for Alabama. But Clemson and Coach Swinney is the perfect fit.

“He’s showing that yes, you can win at a high level, but you can have a good time doing it, too.”

Others have tried to emulate Saban, or Belichick, and either failed miserably or couldn’t quite reach the same heights. Swinney has created a different rubric, but one that has also succeeded largely because he tailored it to the school. As he says, “Clemson is different than a lot of places in a lot of ways.”

It starts with the location, close to recruiting hotbeds but very much a small college town.

“You’re kind of isolated, so you’re engulfed in Clemson,” Elliott said. “That’s all you know when you’re here.”

Georgia coach Kirby Smart, who spent the past nine years as an Alabama assistant, has spent more time studying Clemson’s recruiting than Alabama’s as he shapes his approach. Smart marvels at Clemson’s digital operation — “They had the No. 1 website for hits,” he said — but also noted that because Swinney’s approach is so ingrained, Clemson can target a smaller recruiting pool.

It works for the Tigers, but it may be harder to replicate.

“The risk is if you miss, do you have a fallback?” Smart said. “I want to do it, but I’m not comfortable because I haven’t done it that way.”

The business of fun

Clemson’s player lounge also includes a swanky display showing its NFL alumni, not unlike those seen in other top programs. The Tigers produced two first-round picks last season and has had 32 total players drafted under Swinney (at least four in every season since he became coach).

The program has resources to prepare next-level players. Jeff Davis, a Hall of Fame linebacker at Clemson who played six NFL seasons and now serves as the school’s director of football player relations, recently helped tight end Jordan Leggett set up an insurance policy for his final college season.

Clemson isn’t lacking NFL symbolism — former star running back C.J. Spiller, now with the New Orleans Saints, was working out at the stadium this spring — but, as Elliott points out, “It can’t be the focal point.”

“It’s not an NFL mentality where as long as No. 4 (Deshaun Watson) is on the field producing, we like No. 4, but as soon as he gets hurt, he’s to the side,” co-offensive coordinator Jeff Scott said. “We spend a lot of time investing in the man inside the uniform.

“Each coach and each school and each environment needs to find what works. For us, it’s not all business.”

The bottom-line results help, though, and Swinney’s success has allowed him to overcome some initial resistance to his blueprint. He pushed hard in areas like facilities, where Clemson was (and still is) a bit behind its peers.

The new complex will include all the features teams need to compete for national championships, and some that they don’t, like space for mini golf, laser tag, sand volleyball, bowling and the mysteriously titled “yard games.”

It will be unique and fun, just the way Swinney told the trustees at that breakfast in 2008.

“I probably just should have kept my mouth shut,” he joked. “That was an interesting moment. But it’s worked out.”