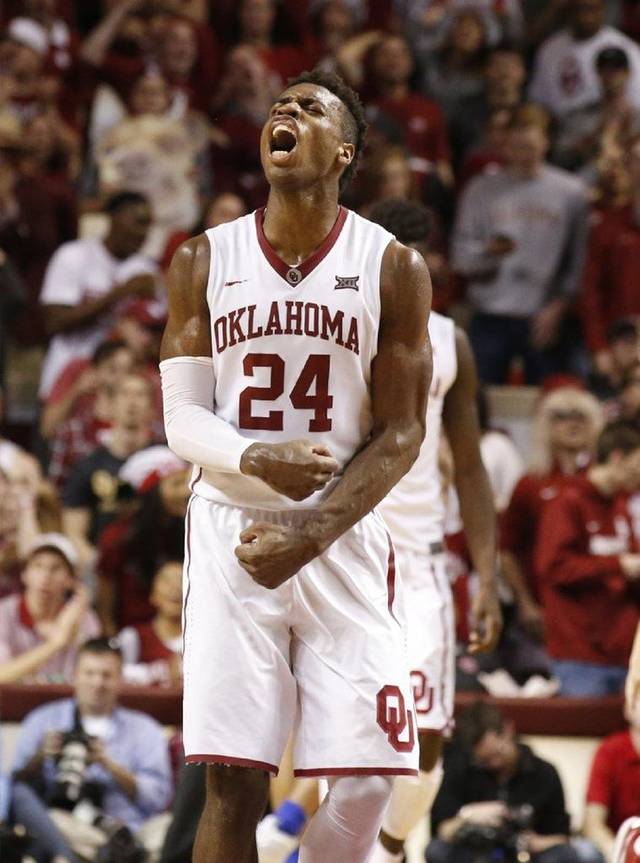 Because of a mildly sprained ankle, Isaiah Cousins sat out the last exhibition game before the start of his sophomore season. When the season opener tipped off, though, Cousins was ready to go — and although no one had any inkling at the time, something special started for Oklahoma.

On Saturday against Villanova in a national semifinal, Cousins and teammates Buddy Hield, Ryan Spangler and Jordan Woodard will start together for the 105th consecutive time. Together, the three seniors and a junior, respectively, have fueled Oklahoma’s rise from rebuilding to the Final Four.

“It’s unbelievable,” Sooners coach Lon Kruger says, and he’s not talking about the current run so much as the group’s remarkable longevity and consistency, which might also be unprecedented, at least in recent years. “I can’t imagine that really ever happening before. Not a sprained ankle, knock on wood. Not an illness.”

Like the lineup, winning has become a constant. Oklahoma is 76-28 in three seasons and has gotten demonstrably better each year, growing along with its core four. The Sooners have been propelled by Hield’s shooting, sure. But Cousins and Spangler and Woodard have been integral, too — all four players average in double figures; combined they account for more than 75% of Oklahoma’s scoring — and so has the group’s chemistry.

In a sport that in many ways is predicated on instant gratification, the cohesion stands out. And if it’s more a very fortunate anomaly than something that can or will be replicated elsewhere — or even at Oklahoma — it has “changed the culture” of the program, according to Kruger, citing the players’ collective attitude, work ethic and decision-making on and off the court.

Along the way, the program has matured and grown with them, from talented but raw sophomores and a freshmen to a savvy, seasoned bunch of upperclassmen who seem unfazed by any situation.

“We ride and fight all together,” Hield says, “so I think ending on a good note would be special for us.”

Oklahoma hasn’t been to the Final Four since 2002, when the current players were in elementary school. The last previous trip to the Elite Eight, before this year, was 2009, long before anyone on the roster arrived. But if college hoops’ biggest stage will be a new experience, when it comes to pressure and almost any situation, they’ve probably been there and done that.

“We know what each other is capable of doing,” Hield says. “We’re comfortable doing this. When everybody’s on the court we feel comfortable and we can be relaxed.”

Others see it, too. Mitch Richmond, the former NBA all-star who played for Kruger at Kansas State and attended both of the Sooners’ games last weekend in Anaheim, noted “a calmness they have within themselves.”

“They know each other,” Oregon forward Jordan Bell said after the Sooners beat the Ducks in the West Region final. “… They are so connected and play so well together. They don’t argue with each other. They play very respectfully together.”

When Oregon jumped out to an early seven-point lead, the Sooners seemed unfazed. Kruger didn’t call timeout. When both Cousins and Woodard picked up two early fouls, he let Cousins keep going; the senior guard responded by sandwiching two three-pointers around a steal and dunk.

They know they’re very close to achieving something else that’s unprecedented at Oklahoma. But when they got that first start together, against Alabama in November 2013, they didn’t envision being in this position. The Sooners won after trailing by 16 points in the first half; it was clear early they had both talent and moxie. But they had a learning curve to climb, too.

“We were young,” says Woodard, who was younger than the others — the junior guard has started every game of his career. “We were young, and I feel like our expectations for ourselves might not have been as high. But as we grew together, I feel like we realized what we were capable of.”

“We lost a lot of games off undisciplined (play) and little things, really,” Cousins says.

They really didn’t lose many games. But they took some lumps, and they’ve certainly grown, both individually and as a unit, with experience. If anything, the Sooners’ nucleus resembles what’s sometimes found at the mid-major level, veterans who’ve been through plenty together and have grown collectively formidable. But even those groups don’t put together this kind of streak.

Consider: None of the core four’s performance ever dipped enough that he was sent to the bench, even for a game. No one was penalized for missing a class or being late for a meeting or some other transgression. No one became dissatisfied and transferred. No one turned pro (although Hield considered the idea after last season, when he was named the Big 12’s player of the year).[usatoday.com]

And somehow, no one has been injured or ill enough to miss a start. Brown says none of the four players has ever really been close to missing a game. A couple of years back, Spangler left a game after taking a hard shot to the shin, but was back for the next game. There have been twisted ankles and assorted bumps and other bruises. But nothing that prevented a start.

“There’s a lot of factors that go into it,” Brown says. “First of all, God has blessed this team with great health. That can’t be underestimated. We’ve had His blessing.”

Never mind games, Brown says they’ve rarely missed practices — and he attributes part of that to Kruger’s philosophy of going light in practices, especially later in seasons, to try to lessen the wear and tear. The Sooners rarely run sprints. Coaches have quick whistles when players hit the floor.

“He does so many things to prevent injuries in practice,” Brown says.

And there’s one more factor, something Brown says he has learned over the years.[usatoday.com]

“Winning is the most powerful drug I know,” he says. “Winning makes it a lot easier or guys to want to go to practice, to want to do that extra work.”

They’ve done plenty of both, starting with extra work. If Kruger’s approach lightens the load, the core four can usually be found in the gym, anyway. Spangler says they keep each other accountable.

“We’ve had our ups and downs and we’ve been through it all together, and we’ve all worked pretty hard,” Spangler says.

Tyler Neal was a senior reserve when the starts streak began. He immediately noted the younger players’ confidence, but more their work ethic.

“Those guys just came in with the idea they would try to outwork each other, and it was infectious to the whole team,” Neal says. “They changed the culture.”

Now, with their 105th consecutive start together coming Saturday — and just maybe their 106th in Monday’s national championship game — they have a chance to change it even more.

“It’s a special team,” Woodard says. “We’ve been through a lot together, so it would be good to end it right.”