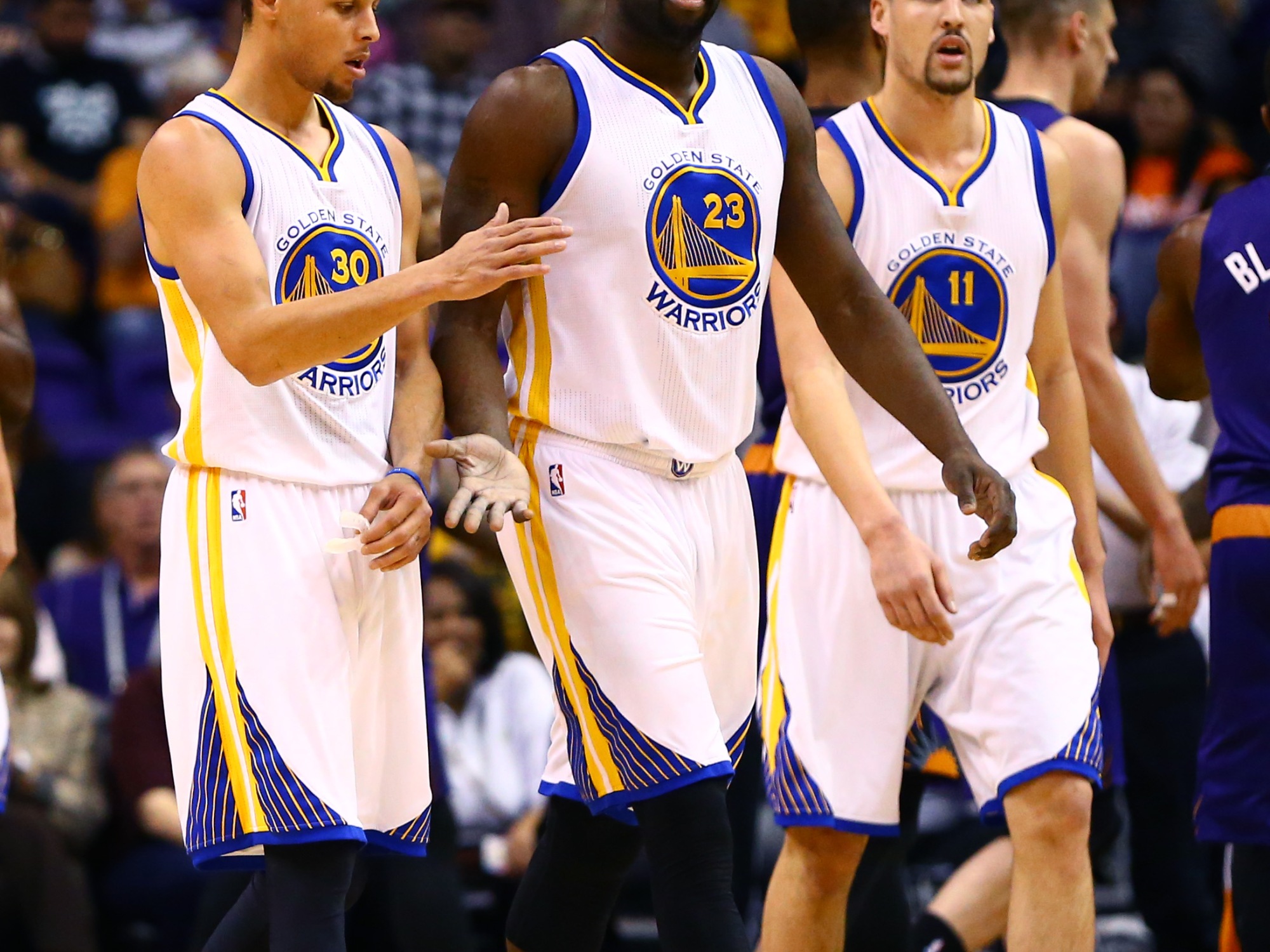 During the 2013 Sweet 16 matchup between No. 4 Michigan and No. 1 Kansas, Steve Kerr, at the time a TBS color commentator, praised the Wolverines’ offense, a jet-quick half-court attack spearheaded by Trey Burke and bolstered by perimeter shooters. “Michigan is a small team,” Kerr explained. “They play basically four guards and [Mitch] McGary.” That was a daring lineup, but an extension of the three-guard sets that have peppered the college landscape for years. The more astute observation by Kerr was how much the Michigan system hinged on a power forward that didn’t play very much like a power forward.

Small ball has taken over the pro game, and there’s been a rush of articles detailing how the Golden State Warriors — under Kerr’s leadership — have sparked a wave of the same in the college game. USA Today reported that several college coaches, like Nevada’s Eric Musselman and Andy Enfield of USC, have shown their players Warriors game film this season, while a New York Times article mused that even old cranks like North Carolina coach Roy Williams have been seduced by the alignment.

Individually, these articles dutifully recount widespread admiration for Golden State, which has in many ways mastered the form. In the aggregate, however, they detail a collateral effect that’s just as compelling: In becoming the baddest bully on the NBA block while playing (more or less) like a mid-major Cinderella, the Warriors have made a big enough impression to convince even the most calcified college Goliaths that they need to run like David. And at the heart of this little revolution isn’t Stephen Curry, but another, equally indispensable Warrior — Draymond Green, who’s anchored Golden State while playing power forward and occasionally center. Curry is the Warriors’ planet-eater, but Green is their Atlas.

In the college game, which has long been dominated by guards gunning 3-pointers, the shift has been noticeable. “Besides the point guard, who has the ball in his hands a good deal of the time, the second-best position on the floor right now is the undersized power forward,” ESPN analyst Fran Fraschilla said. “I call them mismatch 4s, and they come in all shapes and sizes.”

The small-ball 4 isn’t exactly a novel concept for college, of course. In the 1995 tournament, 6-foot-6 power forward Heshimu Evans — a versatile, floor-spacing anachronism in a mid-1990s frontcourt — powered Fraschilla’s 13th-seeded Manhattan squad past Oklahoma in a first-round upset. Then there was VCU in 2011, the team that coach Shaka Smart led to the Final Four with 6-foot-6 Bradford Burgess playing the same role. Or take this season’s Saint Mary’s team, which was stocked with lengthy guards and wings — all of whom made 36-plus percent from three — revolving around one prototypical big. The Gaels’ small lineups had offensive efficiency ratings that ranged from 1.13 points per possession to 1.24, but a weak non-conference schedule and a loss to Gonzaga in the West Coast Conference finals kept SMC from dancing (it is a top seed in the NIT).

What was different about this season’s crop of small-ball teams is that they weren’t just the out-gunned mid-majors like Manhattan, VCU and Saint Mary’s looking for the edge; more high-major squads than ever were sizing down, and there was an uptick in AP top 25 teams dedicating serious minutes to small formations from last season to this. In the tables below, we look at teams in the AP postseason top 25 (as well as those also receiving votes) that used a small ball lineup in at least 10 percent of their possessions in conference play through the end of the conference tournament.

Oregon had 91 points and Davidson had 16 points in ranking

St. Joseph’s had 60 points, Dayton had 11 points and Wisconsin had 9 points in ranking
*Indiana’s small ball possessions were affected by injury to Robert Johnson

That’s where the echo of Green is heard the loudest. If a star recruit believes his path to the NBA means a brief stopover in college as a 3, it’ll be a hard sell to get him to bang down low. But with the success of Green and Golden State, coaches and scouts say they think that it’s now easier to convince recruits that the best way to grab the eyes of scouts is to showcase their positional versatility.

“Because of Draymond, you can point to a recruit and say, ‘Look, there is room for a guy like you,’” Fraschilla said. “It has become a speed and space league, and an on-ball screen with a 4 is way more dangerous now than it has ever been. Selling a kid on becoming a mismatch 4 has never been easier.”

Saint Mary’s coach Randy Bennett concurs with that logic. “Golden State, and that style of play, is so visible, and recruits see that is where the NBA is going,” he said. “Draymond is a great example — it’s easier to sell to recruits that there is nothing wrong with being a downsize 4, which are guys that want to be 3s but are really 4s. And since the NBA is going 4-out-1-in, recruits identify with playing that way. Draymond is the poster child for it.”

The effect has made its way to even the biggest programs. Duke began its 2015 national title run once coach Mike Krzyzewski slid Justise Winslow, a natural 3, to the 4, where his strength, ball-handling and midrange game could be more effective, and paired him with Jahlil Okafor in the starting lineup. Despite that success, Krzyzewski was slow to make the same sort of leap this season: Even though a lineup featuring Grayson Allen at the 1, Matt Jones at the 3 and Brandon Ingram, a small forward with length and athleticism, at the 4 posted the team’s best efficiency rates in conference games through the end of February (1.30 PPP and .96 OPPP), it was on the court for only 8 percent of Duke’s conference game possessions. That changed as Duke geared up for the ACC and NCAA tournaments — by mid-March, that same group’s share was up to 20 percent of the squad’s possessions season, and it was scoring 1.25 PPP.

Duke is far from alone as a big-time program buying in on small ball. Others include:

And then there is California, a team that thrived with Jaylen Brown at the 4. When the 6-foot-7 freshman was recruited to Berkeley, coach Cuonzo Martin felt he could play four positions — and if needed slide into the 5 for spot duty. Brown excels bullying through the lane, creating and then finishing through that contact. But early on in the season, the court was congested with two other forwards (Ivan Rabb, Kameron Rooks or Kingsley Okoroh), which limited Brown’s best attribute: getting to the rim.1 By mid-February, it was clear that Brown put so much pressure on opposing defenses that Martin needed to sacrifice playing time for his frontcourt. At the time, Martin said: “The game has slowed down for him, and he has a better feel for the game. We would love to play him all night long [with three other guards], but we still have to pick and choose the right matchups.”

Martin said most traditional bigs struggle to defend Brown as he comes off ball screens, making him better suited at power forward, where he can make plays from the perimeter without dinging team spacing.

Fraschilla compared Brown’s role to the one Winslow played last season. “He’s got the natural strength for a college 4, but he can also take defenders away from the basket,” Fraschilla said.

That’s as clear an endorsement of the Draymond Effect as you’ll see: Justise Winslow and Jaylen Brown — a lottery pick in last year’s NBA draft, and a likely top pick in this year’s — playing down low for long stretches in college, because that’s just how the game is played.