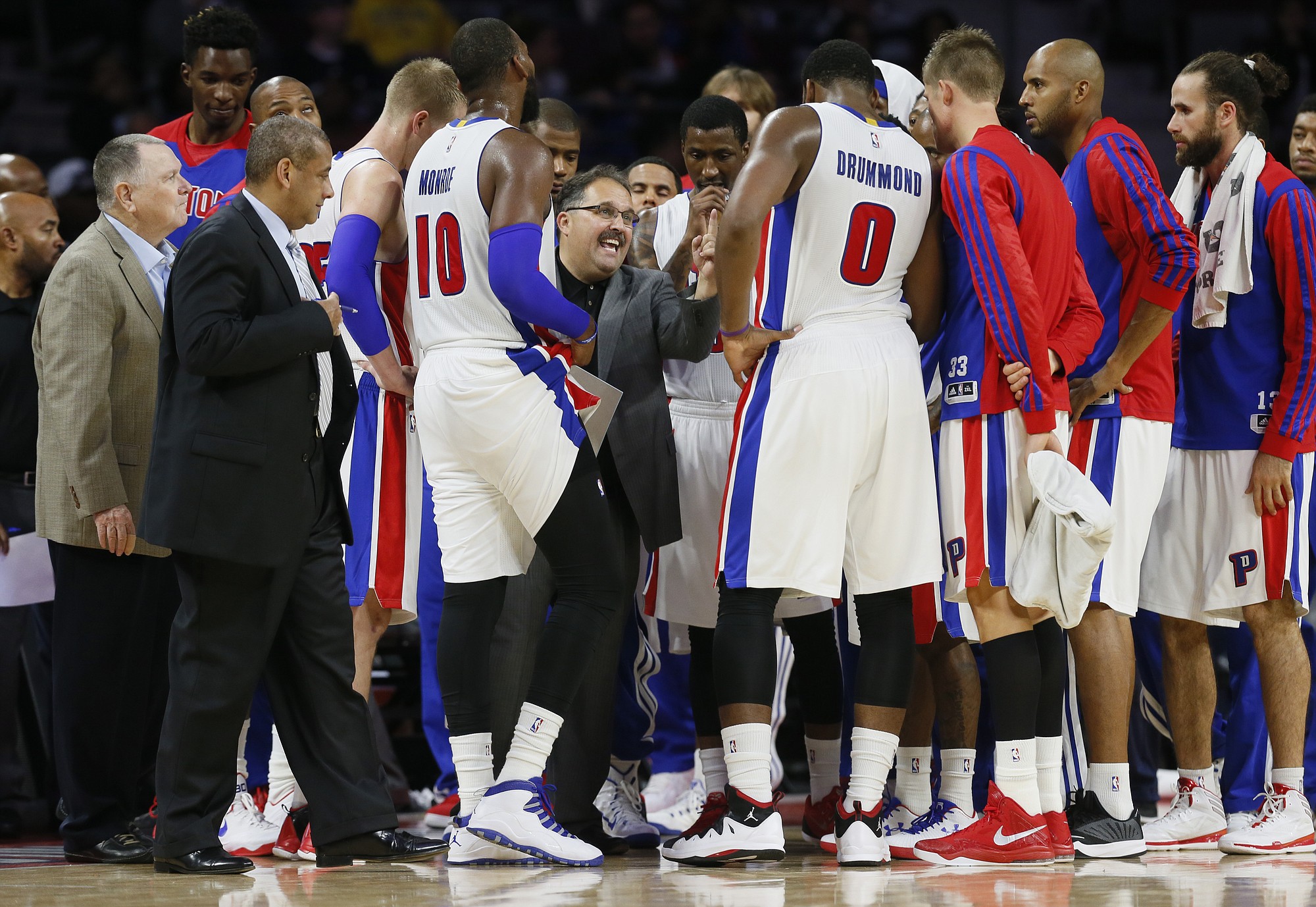 Picture this: down two points with seven seconds to play, the Washington Wizards call timeout and head to the bench. The coaches confer for a few moments, and head coach Randy Wittman joins the huddle, to draw up one of those clever plays for which he’s gaining a reputation. The team takes the floor, carries out the plan, and hits the game-winning shot. Such is post-timeout play-calling in the NBA: a symphony of creativity, talent, and execution.

The notion that NBA coaches sketch out game-swinging improvisational masterworks during timeouts is, like the above scenario, mostly imaginary, not just for the Wizards, who are actually one of the league’s worst teams after timeouts, but for the league as a whole.

“In a situation where you need a score, you don’t draw something up that the team hasn’t run before,” said Mike O’Koren, long-time NBA and collegiate coach and player. “What you’re doing on the clipboard is reminding guys what they’re supposed to be doing. It’s review.”

According to NBA coaches and players, timeouts are rarely used for “drawing up a new play.” Instead, they’re used in myriad other ways, depending on game conditions.

“From a coach’s perspective, you’re looking at things tactically,” said Laron Profit, a former NBA player and current player development coach for the Orlando Magic. “Where are we? What are they doing to us that we need to stop? What do we need to change? How can we disrupt or maintain the flow? From a player’s perspective, a lot of times you just want to rest and regroup.”

“Early in the game, you might be trying to get guys rest, or you see something that you don’t like, or they’re making a run on you,” O’Koren said. “So you’ll choose a play your guys are comfortable running, and then go over it during the timeout. You want to call a good play to get a good shot to try and break that run.”

Later in games, especially close ones, coaches are less likely to experiment than to call proven, reliable plays.

“Coaches worry about execution more than surprising the other team,” said Profit. “When you try to surprise them, a lot of times you end up surprising yourself. No matter the design, it comes down to personnel. If you have good players and they know how to execute, you have a good chance to be successful.”

NBA insiders say that preparation—not novelty—is the key, especially in crunch time. Teams typically use the last few segments of practice to work on late-game plays and situations; when changes are made, they happen long before teams break their in-game huddles.

“Good coaches will add wrinkles to their plays,” Wizards radio analyst Glenn Consor said. “Once you run something a few times, opponents know that play and can prepare for it. Innovative coaches add options or wrinkles. They make changes during shootarounds and practices.”

Numbers support the idea that NBA coaches aren’t dramatically affecting games with their ingenious timeout play-calling. An analysis of the play-by-play data compiled at NylonCalculus.com reveals that after-timeout plays (ATO) over the past six seasons average 0.836 points per play—notably less efficient than other half-court plays, which average about 0.885 points per play. This may be due to the fact that by definition ATO plays start from a dead ball, and dead-ball plays are the league’s least efficient.

“After a timeout, you’re always five-on-five against a set defense,” said O’Koren. “Defensive coaching around the league is good, and while you have time to set your offensive play, the opponent has time to plan their defense.”

Analysis also calls into question the theory that a team’s ATO performance can be used as a measure of coaching effectiveness. Since 2009-10, there’s a solid statistical relationship (a correlation of 0.48) between a team’s overall efficiency and its ATO efficiency; however, the data shows little relationship between overall ATO efficiency and late-game ATO efficiency. While good offenses are more likely to be better ATO, the data suggests that being good ATO doesn’t mean a team will be good in late-game situations.

In addition, ATO efficiency for individual teams varies significantly year to year, with no apparent relationship to coaching changes. The Gregg Popovich–coached San Antonio Spurs, for example, have been the league’s most efficient ATO team over the past four years, but in 2009-10 they ranked No. 24 and in 2010-11 they were No. 17. Did Popovich suddenly become a better coach?

The Los Angeles Clippers twice ranked first overall in ATO points per play during the timespan covered in this analysis: once with Vinny Del Negro, and once with Doc Rivers. The latter is regarded as one of the NBA’s better coaches; the former was criticized (and fired) for an allegedly small playbook and inept game-planning.

The Denver Nuggets were among the league’s most efficient ATO teams from 2009-12, then fell off a cliff in 2012-13. Blame the coaching change from George Karl to Brian Shaw, right? Wrong—that didn’t happen until a year later.

The narrative about Washington being excellent in plays after timeouts because of Wittman is three years out of date. The Wizards ranked sixth in ATO efficiency in Wittman’s first full season as head coach. In the years since: No. 25, No. 25, and No. 28. Since Wittman took over, the Wizards rank just No. 26 in ATO efficiency.

Since 2009-10, here are the top 10 teams in overall efficiency and their average rank:

We could theorize that the Clippers and the Hornets (now Pelicans) might both end up on the list because of Chris Paul, except the Hornets ranked second in 2009-10 with Paul missing 37 games, and then No. 26 with him playing 80 games in 2010-11. After Paul departed, New Orleans’ ATO efficiency surged to No. 11. Meanwhile, the Clippers went from No. 29 in 2010-11 to first in 2011-12, despite the supposedly incompetent Del Negro as coach.

If you thought maybe it boils down to a “go-to player” factor, think again. Miami, for example, wasn’t much good ATO until 2012-13, LeBron James’s third season with the team. Cleveland was decent ATO with James, collapsed when he left, and then went from No. 29 to No. 4 when he returned. That’s slightly suggestive, but then there’s this: last season, Brooklyn led the league in ATO efficiency, even though it would be challenging to identify a quality go-to player (apologies, Iso Joe!) on the team’s roster.

Of course, none of this is to say that excellence in ATO plays doesn’t matter; it certainly can give teams a slight advantage, especially in close contests. Typically, the best teams ATO gain more than a half point per game. That may not sound like much, but in the course of an 82-game schedule, it translates to an extra win or two. Last season, for example, Brooklyn added nearly two wins to their total. The Nets also made the playoffs in a tiebreaker over Indiana, which ranked No. 24 in ATO efficiency.

The bottom line? The next time you see NBA Twitter lauding a coach for an ATO play he drew up in the clutch, keep in mind that the credit probably is misplaced. The coach deserves kudos for designing and calling a play the team has practiced and run countless times, and the players deserve plaudits for the execution, but most likely nothing was brainstormed on the sidelines. Moreover, don’t use reputed ATO performance as a barometer for overall coaching acumen—it’s too variable. The NBA continues to be a player’s league. Good coaches can make good players even better, but most of the magic isn’t happening in the huddle.