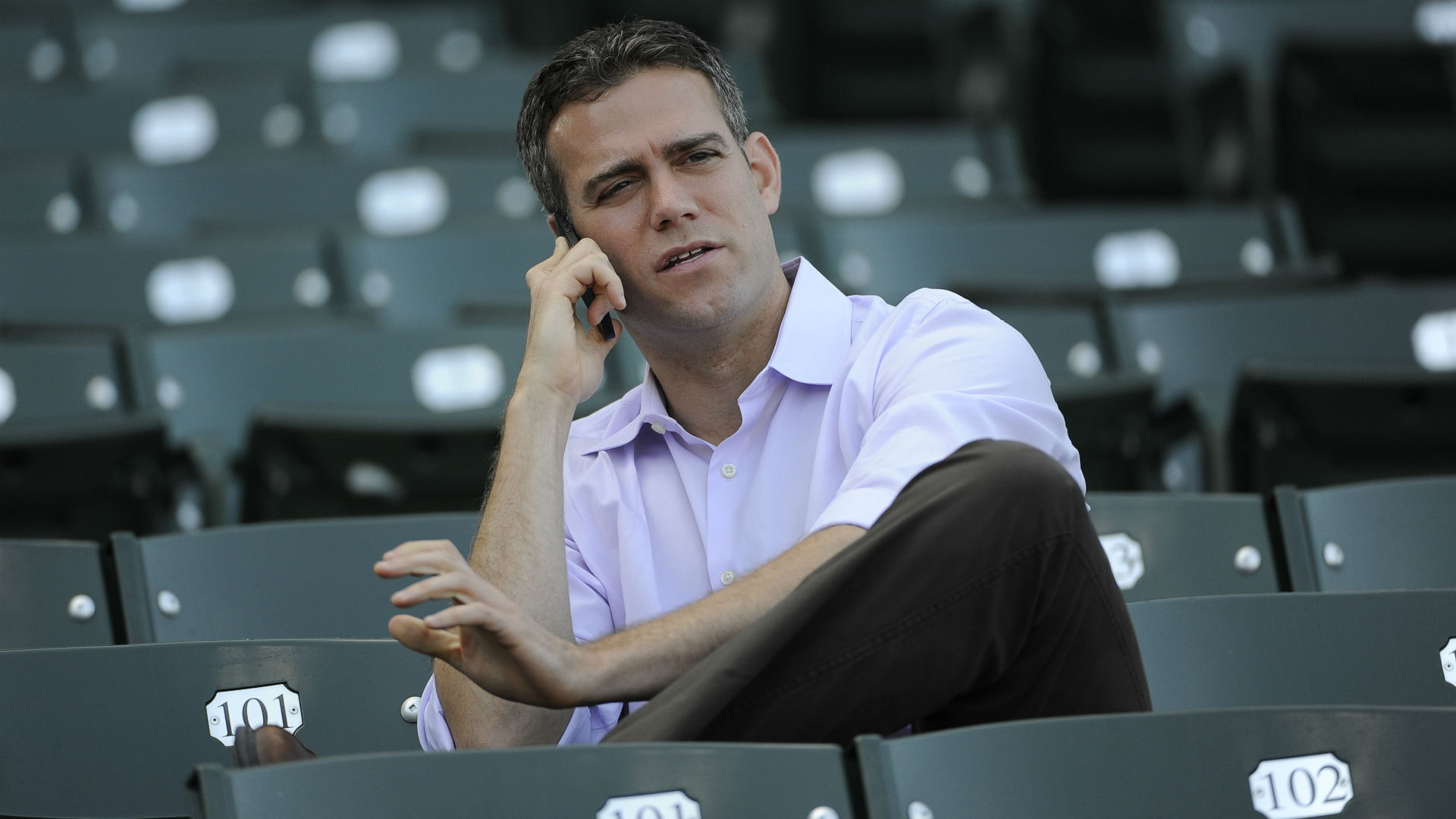 Maybe you read the 2003 book Moneyball, the Art of Winning an Unfair Game, by Michael Lewis. Or maybe you saw ‘‘Moneyball,’’ the 2011 movie, wherein Brad Pitt plays Oakland Athletics general manager Billy Beane on the cusp of metrics replacing the hunch-and-eyeball talent appraisals of yore.

Well, the job that Boston Red Sox owner John Henry (played by Arliss Howard) offers to Beane/Pitt in the movie is the one that Theo Epstein got in real life.

In 2002, at age 28, Epstein became the Red Sox’ general manager, the youngest in major-league history. He would win two World Series titles in the next five years, ending an 86-year championship drought for the Red Sox.

Here’s the relevance of  this to Theo’s current job as president of the Cubs: Sabermetrics and those algorithms he and his crew punched into computers, which then spat out genius statistical info . . . that stuff is dead as prairie chickens.

Well, moneyball is not actually dead — it’s just no more special than a pile of dead chickens. Sitting here in the shade by a practice field, as manager Joe Maddon drops balls into the pitching machine and  a stream of blue-jersied Cubs hit, Epstein describes the march of tech equality.

‘‘Fifteen years ago there weren’t that many teams specializing in the statistical model to succeed,’’ he says. ‘‘You could really get an advantage using it. In the offseason of 2002, into 2003, the Red Sox needed to improve our offense, and we needed to get on base more. So we could sign Davey Ortiz to a one-year deal, Bill Mueller to a two-year deal, and also sign Kevin Millar, whom no one wanted and was going to Japan, based largely on the numbers, on the things you could learn from the statistical analysis.  Now the world is so flat — everyone’s doing that!’’

So what does a smart man do to once again move beyond the herd? He goes new age. He looks at the game he loves and sees that a really big part of it has been taken over by the numerical lists he helped make so popular, yet an equally large part of it has seemingly been ignored—the emotional, human part. How’s that for irony, moneyballers?

‘‘I think the real competitive advantage now is in player development—understanding that your young players are human beings,’’ says Epstein, whose sky-blue shirt and sky-blue cap made this reporter mistake the now-41-year-old at first for a beer salesman. ‘‘Understanding them physically, fundamentally, and mentally — investing in them as people — and helping them progress. And there’s no stat for that.’’

Thus, the Cubs’ three-years-and-counting tank job and seemingly endless restocking of the minor-league system is part of the process Epstein feels one must use to separate yourself from the pack.

‘‘I think we’ve been pretty transparent about the fact that our priority has been to acquire as much young talent as we can,’’ he says. ‘‘We think in three years we’ve done as much as we possibly could to improve the health of our organization.’’

But as he quickly points out, giving up quality veterans and, particularly, drafting at the top ‘‘is something we hope we never do again.’’ Because drafting high means your team sucks.  And at some point, even Cubs fans will ask for wins over hope.

It’s a concept that has to do with more than just finding talent. Once found, that talent must be understood, educated, made comfortable and placed in soil where it blooms into the grand flower it portends.

He’s risking a lot on the theory.

‘‘We should have a talented farm system, after drafting high and trading away some of our best players,’’ he says. ‘‘If we didn’t, I should have been fired by now.’’

So that means someday soon the Cubs better have a starting team full of these young acquisitions, all mentally fit. They have four men working in the Mental Skills Program for the team. Theo wants leaders and thinks he’s got a number of them. Using everything from mindfulness (‘‘I’m awful at it,’’ he admits) to living in the moment and understanding failure, his players need to be prepared or baseball’s roller-coaster.

He finds it embarrassing that he and so many of the front-office people don’t speak Spanish, so a Spanish tutor is coming in two mornings a week to teach it to the brass.

‘‘One of the worst decisions I ever made in life was taking French,’’ he says. Mistakes, yep, he’ll admit to them.

But not this plan.

‘‘I don’t think everything in baseball — or life — is quantifiable,’’ he says. ‘‘Sure, if you ignore the stats, if you ignore empiricism, if you ignore objective evidence, then you’re a fool. But if you invest in stats so fully that you’re blind to the fact the game is played by human beings, then you’re just as much of a fool.’’