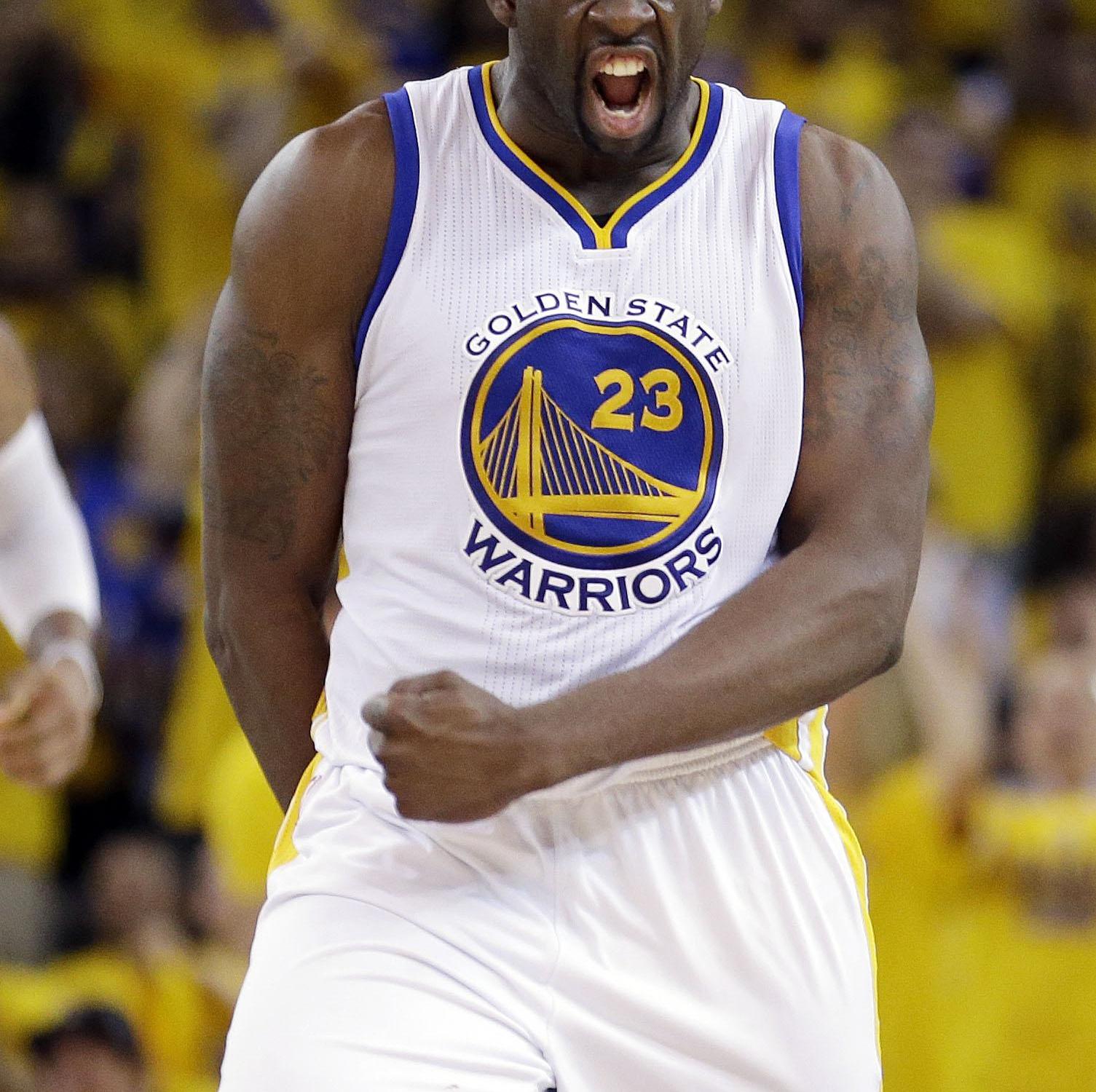 The Golden State Warriors were going over a play when Draymond Green remembered something. This happens a lot. Some people who have come into contact with Green say he is a basketball savant. Others suggest that he has a natural, almost telepathic feel for the game. Both of those things are true, but there’s another reason: Draymond Green has a photographic memory.

“I remember everything,” Green told me following a Warriors shootaround at their practice facility in late January. “Ever since I was a little kid.”

What Green remembered in this particular instance was that when the Pistons ran that action against them last year it resulted in a pair of corner threes for Kentavious-Caldwell Pope. Never one to keep things to himself, Green relayed that bit of information to quizzical looks from his coaches and teammates.

“Everybody looked at me like, ‘What are you talking about?’” Green said. “I’m like, just listen. ‘You can’t shoot the gap on this play because if you do they got us last year twice with corner threes.’ They put it on the film and they were like, ‘Hey, he was right.’ Yeah, I remember everything.”

If you were to construct the perfect basketball player on paper, it would look nothing like Draymond Green. Too small to handle bigger frontcourt players and not quick enough to stay with more agile wings, Green was the 35th player chosen in his draft class. It’s not that everyone missed on Green, it’s just that his résumé seemed so familiar. Undersized collegiate forwards are a dime a dozen come draft time.

“We saw a guy that could help us win basketball games,” Warriors GM Bob Myers says. “Didn’t fit the perfect profile of really any position, but he had succeeded at a really high level in college. Everyone we spoke to talked about his maturity, his professionalism, his basketball IQ, so we didn’t try to overthink it. We just thought, let’s get this guy and see what happens. What’s happened has been more than we thought. It’s been very interesting.”

In less than four years, Green has progressed from the end of the rotation to a spot on the All-Star team. He’ll be an All-Defensive team mainstay for years to come and will likely be an All-NBA performer, as well. He’s prominently mentioned among the best power forwards of the day, if you can even call him a power forward, which you probably can’t since relegating him to a position is what caused people to overlook him in the first place.

Of course, there are many reasons why he is such an anomaly. Green has an enormous wingspan and an incredibly strong core that allow him to play much bigger than his size. While not a great athlete in a traditional sense, he has excellent lateral movement and a quick second jump. All that combined with his instant recall, superior intelligence and a rare feel for the rhythms of the game makes him a truly unique player. There’s also the matter of his competitiveness.

“He will rip your throat out,” Golden State coach Steve Kerr says. “There’s a lot of great players who want to win, but it truly matters to him. Everything is about winning.”

No one saw this coming. Myers laughed at the notion. Kerr reminds you that he wasn’t even going to start Green until an injury to David Lee changed the equation forever.

“I knew Draymond was a jack of all trades. I was worried that he was going to be a master of none,” Kerr says. “What does he do really well? It turns out that he does everything really well.”

The Golden State offensive system is a wonderful amalgam of styles that includes elements of Mike D’Antoni’s Seven Seconds or Less, Gregg Popovich’s pace-and-space, Jerry Sloan’s flex actions and Tex Winter’s read-and-react principles. What makes the Warriors unique is that they are influenced by all of those things and defined by none of them. What makes them special is the players they have on the roster. They are all skilled, savvy and smart.

Draymond Green fits this system perfectly, but it’s not fair to label him a system player. Put him on any team and that team would be better immediately. But put him on a team with Stephen Curry and you have the backbone of not only a championship team, but also one of the greatest of all time.

“Somebody would say he fits into our system or he fits into our system with Steph,” Myers said. “I would say he helped make this system. He’s part of the reason the system developed. As much as he benefits from Steph, Steph benefits from him. So he’s cultivated a system on his own with his work ethic and his ability to play that we’ve embraced. In some ways he’s pioneered the concept of a playmaking four.”

While Curry is a wondrous shooter who can make even the most hardened league observer double over in laughter with his shot making, the beauty of the Warriors’ play is in its simplicity.

Famously confident and sure of himself, known as one of the premier trash talkers in the sport, even Green shakes his head at what he’s been able to accomplish.

Green didn’t just break the mold, he invented a new model: A hybrid frontcourt player who can guard multiple positions, switch on screens and knock down jump shots. He’s also a gifted passer, a skill that has elevated him beyond the ranks of role players into the realm of the truly elite. Who would have guessed that everyone would be looking for the next Draymond Green?

“I’ve been hearing that a lot lately and it’s funny to me because two years ago, a year ago, no one was saying that,” Green says. “No one was looking for Draymond Green. That type of stuff just blows my mind.”

Good luck finding another player like him. In many ways, Green is a true original.

With so much attention paid to Curry, the Warriors need players who can complement his talent. They have shooters, passers, cutters and screeners. What they needed to complete the puzzle was someone who could make opponents pay for double teams.

“Everybody commits two (defenders) to Steph on the high screen,” Kerr says. “You have to. You have to try to get the ball out of his hands. Once we realized that Draymond was a playmaker it was, ‘Oh wait. Now we’re on to something. Now we can cause some real problems for teams.’”

To illustrate the point, Kerr nods toward the midcourt logo on the team’s practice court while referencing a recent game against the Cavaliers.

“See where that ‘S’ is in Warriors?” Kerr says. “Draymond set the screen right there, a good 10 or 12 feet beyond the three-point line. Cleveland jumped out. Kevin Love showed. (Matthew) Dellavedova went over the top. Nobody does that 40 feet from the basket, but it actually makes sense against Steph because he can literally pull up and make a shot from there. That’s what Steph forces. He forces defenses to do things they’re not used to doing and it creates all this space. He gets it to Draymond and it’s 4-on-3 from there because the other guys are so far away from the hoop.”

As a first-year starter, Green averaged 11.7 points and 3.7 assists per game. Solid numbers, but hardly the stuff of All-Star nods or All-NBA talk. This season, he’s doubled his assists and increased his scoring and rebounding while shooting over 40 percent from behind the three-point line. When he gets the ball in space at the top of the key with a numbers advantage, it’s simply a matter of making the right read.

“Our offense is based on ball movement, player movement, cutting, never letting the defense relax,” Green says. “You catch the ball and don’t get a shot, move the ball along. Don’t be a ball stopper.”

Green’s passing ability would be uncanny if it hadn’t been drilled into him at an early age. Back when he was in elementary school, his uncle Bennie Babers taught him the game. Before the kids could play, they had to know how to play and Babers made sure his nephew was well-versed in the art of playing point guard.

“Growing up as kids we used to be mad about it,” Green says. “He never rolled the balls out to us and said, ‘Go play.’ He actually taught us the game, made us read situations, made us learn about the game of basketball.”

Green continued to hone those skills as a high school player in Saginaw, Mich., and later at Michigan State under Tom Izzo. It would be a mistake, however, to suggest that Green is merely a product of good coaching and strong fundamentals. While certainly a part of his story, coaching and drills alone can’t properly explain the way he sees the court.

“As I’ve grown at different levels I’ve had help along on the way in growing my basketball IQ and knowing what you look for,” Green says. “Michigan State coaches used to tell me if you feel a guy here, the next man to that side is probably open. Having great coaches along the way has helped me out and polished that skill. But I honestly feel it’s just God-given ability. It’s one of my God-given strengths.”

It’s on defense where Draymond Green first made his reputation and it’s on defense where he has become one of the defining players of the moment. Green was a runner-up to Kawhi Leonard for Defensive Player of the Year and is constantly mentioned among the handful of contenders for the award this season. He’s a very good one-on-one defender, but he’s an even better team defender and that’s what really matters in today’s NBA.

The concept of switching has been around for as long as people have been running the pick-and-roll, but it was typically seen as a last resort, even a surrender. Giving up your man to a teammate was an acknowledgement that you couldn’t stay with him and the practice invites mismatches, in terms of either size or speed.

For the Warriors, switching is less an act of compliance than an act of aggression. Make it past one defender and there’s another waiting to cut off your path. Green is hardly the only Golden State player who excels in Ron Adams’ defensive system, but he may be the most extreme example.

“What position does he play was the big thing,” Myers says. “He’s taken that and turned it on his head and now the model is position-less basketball. Draymond is a trend setter in that capacity as far as not having to fit the perfect prototype of a power forward or a small forward.”