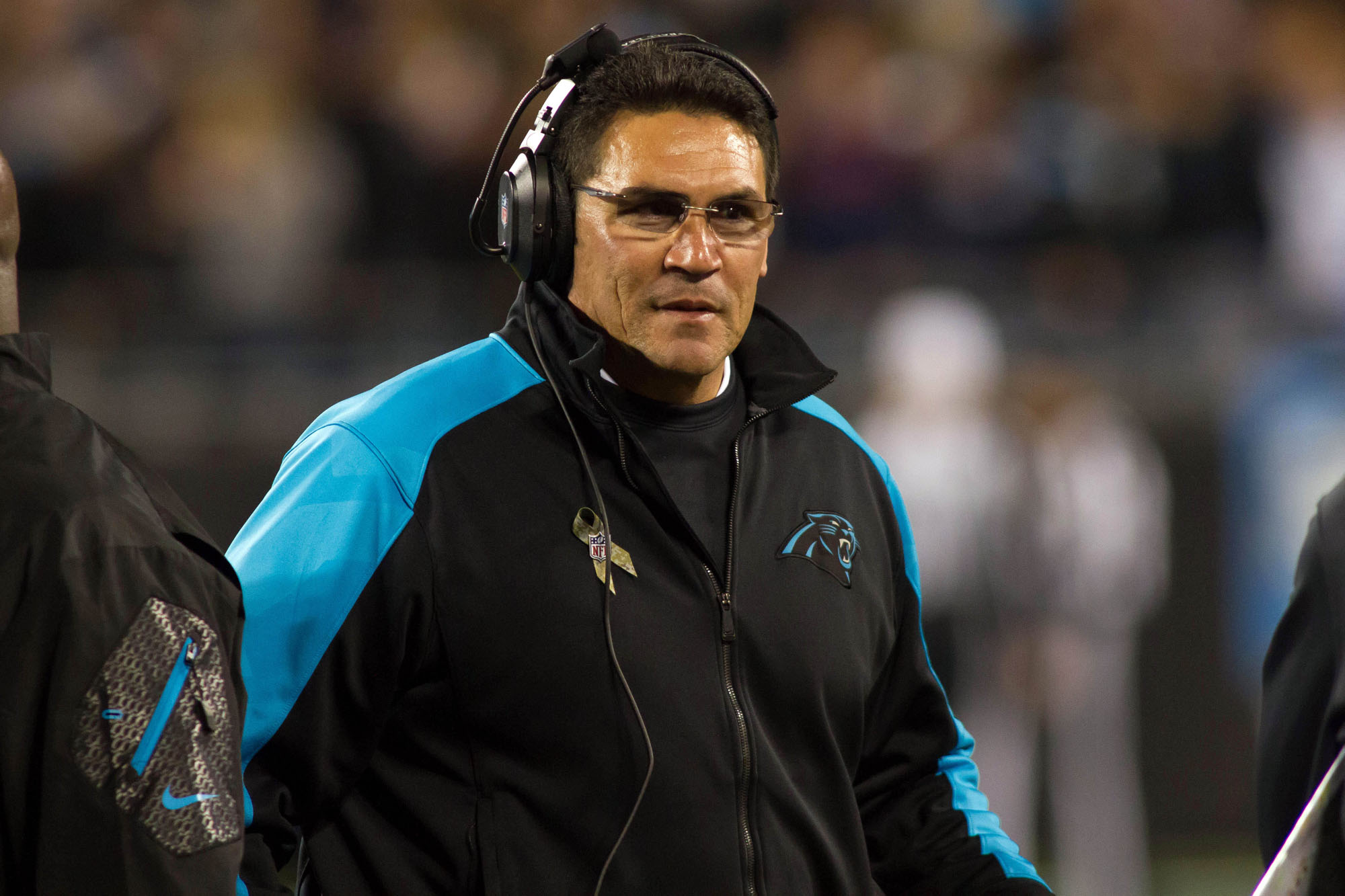 The best team has a great sense of family.
The best family has a great culture.
Within that culture there is tremendous character.

Blah blah blah character, blah blah sense of family and blah culture. Heard it before. All coaches at all levels in all sports say something like this every season, or maybe a few times per the season.

Do they say it every day? Do they also have it leading off a Power Point at the daily team meeting? Do they carry the message on a folded-up index card in a pocket during games, alone in the pocket, so it can be pulled out to remind the team about family and culture and character if need be?

Rivera does. He doesn’t care how corny and hackneyed it is. It’s a feeling he got in his second season as a player in the NFL, with the Super Bowl champion Bears and coach Mike Ditka in 1985, the Super Bowl Shuffle Bears. And it’s a feeling he’s been chasing ever since—in every coaching job he’s had, and certainly in this one, with the Panthers, who will host the Cardinals in the NFC Championship Game on Sunday. It’s the first conference title game ever in Charlotte. You can credit many people for the Panthers playing the biggest home game in their history this week, but the more people you ask around here, the more say it’s not happening without the steady and nurturing hand of Rivera.

“When I talk about family, and culture, and character, I know what a lot of people think,” Rivera says. “But to me this game has so much to do with building a family. I think back to that ’85 team, which was different than any team that Coach Ditka had. That ’85 group of guys loved each other. And in ’86 it was different. Even though we were better statistically, ’85 was about a family and we never recaptured that. This team right now seems to be capturing that family sense. As a coach it’s exciting because you watch these guys and they go to dinner, they hang out, they go bowling, they go to the basketball games together. Guys have a charity event and 25 teammates show up. We bring Charles Tillman in this year, and he’s new, and he does this thing for the Wounded Warrior Project and 25 or 30 guys show up, but that’s the kind of group that we have.”

It’s interesting to watch the Panthers. When things are going well, all teams look happy. But this is a team that lingers in the locker room. Players’ kids come in and run around, and families are here, and former players; after the divisional playoff win over Seattle, former tackle Jordan Gross was engrossed in technique talk in one corner of the room with center Ryan Kalil and tackle Mike Remmers. When the last few reporters left, there were still 10 to 12 players reliving what had just happened in knocking off the two-time NFC champs.

You always hear this stuff, coaches preaching family. But does it matter? No team gets to this weekend—to the NFL’s final four—without talent, and no team is winning without a quarterback. That’s a fact. But look at the coaching approaches this weekend. Bill Belichick makes a new game plan every week; Brandon LaFell knows he might get 12 targets one week and two the next, and he rolls with it, because Belichick demands his players be team guys. In Denver, you haven’t heard a peep out of the defense about the offense not carrying its weight when the Broncos struggle to score week after week; defenders have bought into the we’ll-win-it-if-we-have-to spin. The Cardinals have six receiving weapons, and the load varies almost weekly. John Brown had a three-game stretch of 28 targets from Carson Palmer earlier this season. Then Larry Fitzgerald had 41 over three games, and then Michael Floyd 29 over three games. “We just don’t get into the discussion of who’s getting the ball,” Carson Palmer said earlier this year, “because they all know they’re going to get it a lot, and soon. Nobody complains.”

In Carolina, here’s how the sense of team helps on Sundays, according fullback Mike Tolbert, who has been here since 2012: “The way coach Rivera has developed the locker room, I’m doing my job not just for me but for the guys around me. I truly care about Jonathan [Stewart, the running back he lead-blocks for]. I truly care about Cam [Newton]. If I miss my block, they might get hurt. So I don’t want that to happen. I don’t want anybody on this team to be disappointed in me. I think that’s the mentality all throughout this team. In any family, we don’t want to let anyone in our family down.”

“I think it’s important to have a sense of team, of unselfishness, that exists through the team,” Rivera says. “The one thing I’ve taken from Coach Ditka is taking ownership. Be responsible for yourself. Be the best player and person you can be. I will never be Mike Ditka. He had such a high standard and it took me awhile to get it as a player. I always wondered, Why is he always so hard on us? Why? His standard was a Hall of Fame standard. I was never a Hall of Famer as a player, but I always try to carry that high standard. If you carry that standard, and you try to emulate that, you’re going to be the best player you can, and the best teammate you can be.”

Ditka is pleased to hear that he’s remembered. But he doesn’t take much credit for Rivera being Rivera.

“I’m an old man now,” Ditka, 76, said this week. “My time is past. There was a time when my way was OK. I’m glad Ron took something from his time with me, but here’s what he’s added—the cerebral touch, the great relationship with his players. What I always preached was that talent is a part of football. But talent without character is nothing. You’ll lose without character.”

Fourteen months ago, the Panthers played at Minnesota and lost, 31-13. It was a debacle. Two Panther punts were blocked and returned for touchdowns. Carolina was 3-8-1. Rivera, in nearly four seasons as coach, was 28-32-1, with no playoff wins. The clock was ticking on his Carolina career.

The next day, with the 2014 season all but lost, Rivera said to the team, in effect:The plan we have works. I know it does. We’re sticking to the plan.

“It was one of the most wonderful things I’ve witnessed since I’ve been in the league,” recalls veteran receiver Jerricho Cotchery. “The atmosphere around the team was so good, even with our record. I mean, you have to be an incredible leader, with great faith in what you do, to say something like in the position we were in.”

“A lot of people look for immediate success,” says center Ryan Kalil. “They don’t get it, and they move on and fire people and they reset. This is an organization that believes in its process and stays with its process and allowed Coach to stay the course and keep building on his foundation. Building a solid team takes time. It’s unfortunate what you see around the league, after a couple seasons, teams reset when they have some tough games and even if they love the coach they fire him anyway. That’s terrible. Our team doesn’t easily get influenced by the outside, which is tough in this day and age. I am proud of that fact that we’re stoic in that regard and do a good job in that and trust in their process.”